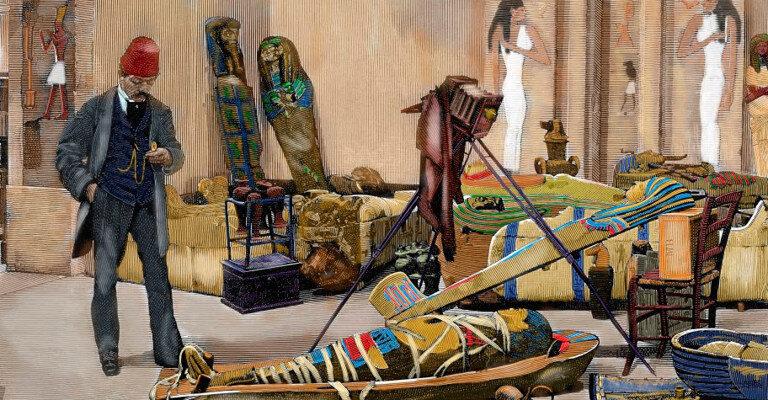 Most people have only ever seen a genuine Egyptian mummy in a museum; fictional mummies, of course, are all over film, literature, and Halloween costume stores. But in centuries past, mummies were put to a variety of inventive uses: for art and commerce, science and entertainment, and possibly even to provide paper.

Many of these uses and abuses stemmed from the Egyptomania that gripped Europe and America throughout the 19th century, set off by Napoleon’s invasion of the country in 1798 and nourished by a string of amazing archeological discoveries.

By the 1830s, upper-class Western Europeans and Americans began flooding Egypt in search of treasure, and mummies became a chief prize—treated as a symbol of the entire country’s exotic allure, and the “ mysteries of the Orient “ more generally. The mummy madness, dubbed “mummia” progressed to the point where, Egyptologist Beverley Rogers notes , in 1833 a monk named Father Géramb remarked to the then-ruler of Egypt, Mohammed Ali,

“it would be hardly respectable, on one’s return from Egypt, to present oneself in Europe without a mummy in one hand and a crocodile in the other.”

The Snake Charmer is an oil-on-canvas Orientalist painting by French artist Jean-Léon Gérôme produced around 1879.

How disturbingly inventive these tourists could be.

Strange as it may seem, people in early modern Europe frequently practiced a kind of cannibalism for health . According to historian Richard Sugg , “Up until the late 18th century, the human body was a widely accepted therapeutic agent. The most popular treatments involved flesh, bone, or blood, along with a variety of moss sometimes found on human skulls.“

Mummy, often sold as “mummia” (a confusing word that also refers to the bitumen with which mummies were embalmed), was applied to the skin or powdered and mixed into drinks as a treatment for bruising and other ailments. The belief may have come from ancients such as Pliny the Elder, who wrote that the bitumen used to embalm mummies offered healing powers.