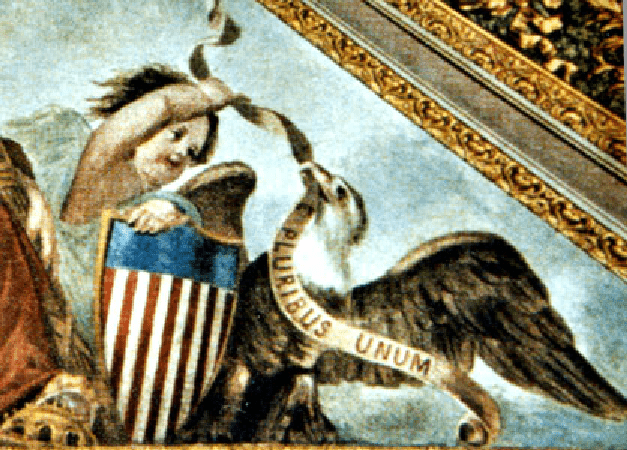 E pluribus unum is the motto suggested by the committee Congress appointed on July 4, 1776 to design “a seal for the United States of America.” The below sketch of their design accompanied a detailed description of their idea for the new nation’s official emblem.

A motto’s purpose is to express the theme of a seal’s imagery – especially that of the shield.

The center section of this shield has six symbols for “the Countries from which these States have been peopled“: the rose (England), thistle (Scotland), harp (Ireland), fleur-de-lis (France), lion (Holland), and an imperial eagle (Germany).

Linked together around the shield are 13 smaller shields, each with the initials for one of the “thirteen independent States of America.”

On August 20, 1776, this first committee submitted their Great Seal design to Congress (including Benjamin Franklin’s idea for the reverse side).

Although their design was not approved (and two more committees would be appointed), their motto E Pluribus Unum was selected by Charles Thomson in 1782 when he created the final Great Seal whose centerpiece is the American bald Eagle: “…in his beak a scroll, inscribed with this Motto:

In the 1770s, symbols of unity were common on the money. But the meaning is not what is commonly thought of as “everyone into a melting pot to make a soup”

America was not envisioned to a “melting pot” where everyone blended together, but originally America was described as a bouquet of different flowers, where unity and individuality coexisted.

The idea of a bouquet of flowers comes from the Gentleman’s Magazine, or Monthly Intelligencer, which had been published monthly in London since 1731 and was well known to literate Americans in the 1770s.

The annual volume with “E Pluribus Unum” at the bottom of its title page brought together the magazine’s twelve editions from that year. The Latin motto “E Pluribus Unum” appeared on the title page of the annual volume of theGentleman’s Magazine or Monthly Intelligencer – next to a drawing of a hand holding a bouquet of different flowers. It provided readers with lots of useful information:

Could this be the origin of the original Gentleman’s Magazine ? Asteroid Bennu May Give Clues to Birth of Solar System