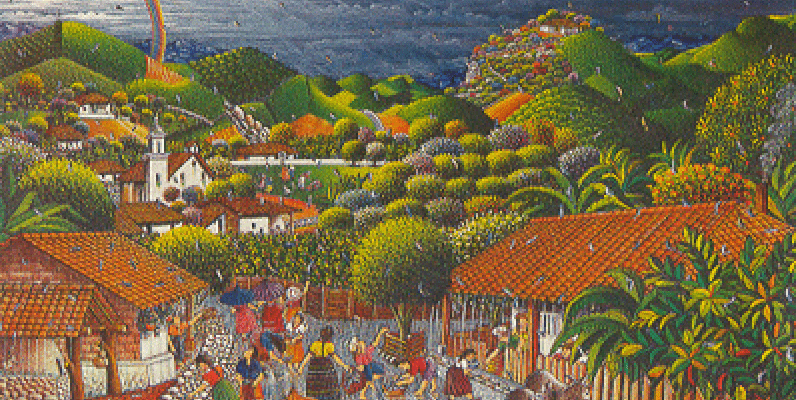 Stories of raining animals or objects date back to the first century A.D. when Pliny The Elder first documented frogs falling from the sky. In 1794, French soldiers also witnessed a rain of toads. In Yoro, Honduras, Hondurans experience the Lluvia de Peces phenomenon where the skies literally rain fish. It’s been happening annually for more than a century. First – it seems that this phenomenon has not been investigated too much by scientists. There are rumours about expedition organized by National Geographic Society in 1970ies, who were eyewitnesses to the fish rain. Unfortunately there can not be found an article about this in “National Geographic Magazine”.

The information about the fish is contradicting. All agree that it is rather small, some 12 – 15 cm long and might be a kind of sardine. Some say that fish is blind – but on pictures there are well seen eyes. Some say that this is freshwater fish, some – that definitely sea fish, some – that it is subterranean fish. Again – all agree that this kind of fish is not seen in waters around Yoro. Sardines live in the sea but occasionally they migrate by rivers inland, also in Honduras. One common explanation for animals falling from the sky can be attributed to waterspouts, but the nearest marine source for fish for the Lluvia de Peces phenominon is over 200 km (140 miles) away and waterspouts just don’t travel that far. This event may also be connected to fresh water fish moving to subterranean water due to seasonal changes. Heavy rains possibly wash the fish up and when the water recedes, the fish are stranded on land.

This wonder is repeated every year – here is the Legend: Some believe that when Spanish priest Father José Manuel (Jesus de) Subirana saw how poor and hungry the locals of Yoro were, he prayed for the miracle of food to be bestowed upon the people. Subirana was a figure in the history of Christianity in Honduras. He arrived in Honduras in 1855 and has become part of the legend of The Rain of Fish. The legend tells the following: ” Father Subirana saw how poor are the people in Honduras and prayed 3 days and 3 nights asking God for miracle to help the poor people and to provide them food. After these three days and nights God took note on this and there came a dark cloud. Lots of tasty fish rained from the sky, feeding all the people. Beginning in 1998, locals of Honduras have held an annual Festival de Lluvia de Peces to celebrate the phenomenon. The date of the festival is variable, coinciding with the first major  rainfall in May or June.

The festival includes a parade and carnival.