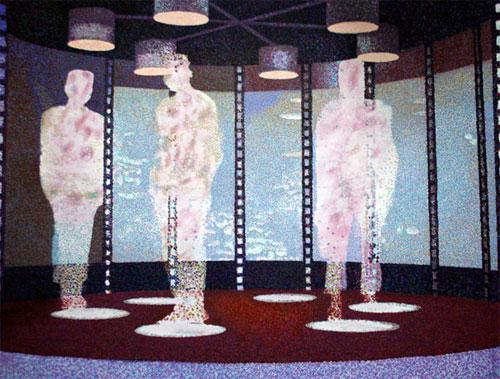 Scientists used a telescope to direct photons to satellites and then measure the photons’ quantum properties on their return. The green laser visible in the image is used to track the location of the satellite. The scheme shows that quantum communication in space may be technologically feasible.

In a feat that demonstrates the feasibility of using satellites to transmit uncrackable quantum messages, scientists have measured the quantum properties of photons sent to space and back again.

Physicists beamed the blips of light up to a satellite that reflected them back to Earth. Upon the photons’ return, the team, led by Paolo Villoresi of the University of Padua in Italy, observed a property known as quantum interference. That confirmed that the particles’ quantum traits remained intact over the 5,000-kilometer space voyage.

Everything that happened in Star Trek becomes true, eventually… The technique could one day lead to quantum cryptography by satellite,allowing users to send snoop-proof encryption keys for encoding secret information. “ It’s important for the sake of secure communication and advancement of physics,” says Villoresi. But that’s not the only reason he took on the challenge. “I can more honestly say that it’s cool.”

One day, we shall travel by photon.