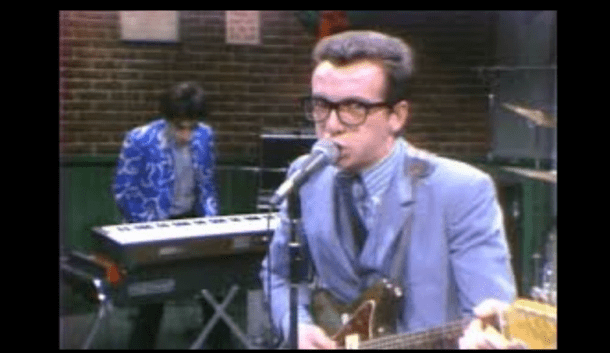 It was almost 40 years ago in December 1977 on Saturday night live one man finally had enough with the way record corporations were trying to dictate his career. Elvis Costello was actually not supposed to be the musical guest on the show that evening when the Sex Pistols were unable to get visas. SNL asked Elvis Castillo to come and perform at the last minute because he was touring with his band The Attractions in the local area. His record, although not available in America, was doing very well in the UK. It wasn’t even available as an import. That was no matter, because Saturday Night Live sometimes chose a musical guest that was out of the ordinary. The story goes that there was a disagreement between Elvis Costello and the record label over which song to play at the show. The record label was looking out for their own financial interests and wanted Elvis to play the song “Less Than Zero.” They were trying to get as much USA type as possible before the record release.

Elvis Castillo was unhappy with this direct order from his record label though it is true that the band did play “Less than Zero” during all rehearsals. When it came to finally perform live, The band started playing “Less than Zero,” but after 10 seconds, Elvis Castillo turned around to stop the band, and then he turned to address the audience saying:

Obviously, SNL has done a good job of screening the internet and taking this off of display. And so the only thing we could find is a nice mashup of stills to show this rebellious moment in rock n roll television. After stopping the band he instructed them to launch into the iconic song Radio radio. For many reasons it remains one of the most memorable moments in rock’n roll history as well as in the history of Saturday Night Live broadcast. After the show was over, Elvis Castillo was banned from Saturday Night Live for more than a decade.

The lyrics to Radio Radio is basically making an ass out of the music business.. and that was an uncomfortable message.

Most people believe that this is because the timing through the show off of schedule as the extra time he took stopping the band and playing a completely different song made it impossible for the actors on Saturday Night Live to perform the rest of the skits for the show.

In an interview later Elvis Costello said he was inspired to do the song change by remembering what Jimi Hendrix did, when he did the exact same thing years earlier on the BBC. When he’s band played “Sunshine of your Love” instead of “Hey Joe.”

By modern standards it may not seem to be very defiant act, but the fact of the matter is years ago when record labels overly controlled artists, Elvis Costello pulled off one of the greatest rock’n roll rebellion acts live… standing up against the corporate record label control.

The Beastie Boys played homage to this SNL event on their 1999 appearance on where else? Saturday Night Live!