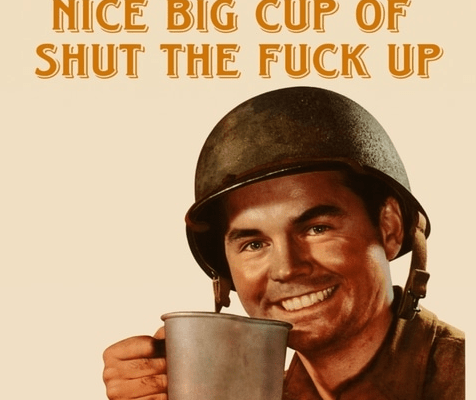 Thing is, just like you get at the local red roof seedy motel> a coffee flavored, overly sugared water drink…you’d think that our Generals would feed our soldiers some one ounce thick as mud Cuban espresso shots and get on with it.

“The U.S. Army and the Department of Defense have developed an algorithm to answer that age old question:If you need to wake up, caffeine can help. But for the optimal jolt, how much and when?  It’s of critical interest because soldiers may go for days without getting enough sleep or, in some cases, any sleep at all.

A perfectly timed and ideal portion of caffeine can fend off fatigue that might otherwise jeopardize a mission or put lives at risk.

The research improves upon existing one-size-fits-all military guidelines. About 40% of soldiers sleep no more than five hours a night—substantially less than the seven-plus hours recommended by the U.S. Centers for Disease Control and Prevention . Dosing strategies generated via algorithm will vary depending on the circumstances.An otherwise well-rested soldier who gets five hours of sleep one night could achieve a level of alertness resembling eight hours of sleep by consuming more coffee.”