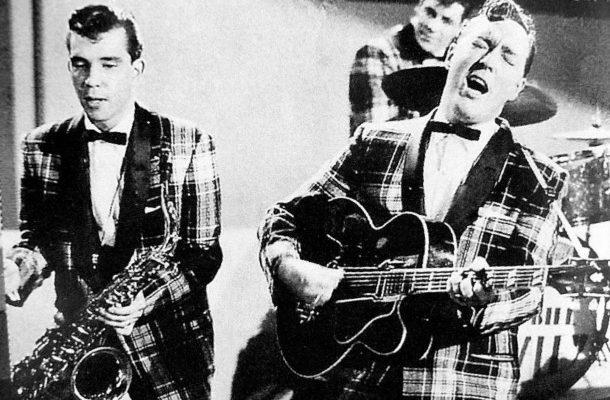 In the early days of Rock n Roll, when the very definition was coming to be, beginning in the 1950’s, the rise of “race records” on radio evolved through heavy metal, and then to retro alternative sounds. We all gyrate to it, but what exactly is the definition of Rock n Roll? So, what are the suggested ingredients in a Rock n Roll Soup?

First, throw in some Songs with a Sexual Innuendo

The original lyrics were lewd and bawdy, (Tutti Frutti, Loose Booty) the song was ‘cleaned up’ for radio airplay, however the “A wop bop a lu bop, a wop bam boom” still carries the same meaning. Little Richard, the self proclaimed “Queen” of Rock n Roll was openly homosexual, but the conservative audience didn’t know that, they just liked his style. Tutti Frutti was slang for “a gay man.”  And “Aww Rudi” was slang for “that’s cool” So, you can guess what Little Richard was really singing about.

And so the inside joke was on. In Rock n Roll, there was always a sexual inuendo, a hidden meaning. After all, the term Rock n Roll was slang for sex, rocking and rolling around in bed, or the back seat of a car.

Tutti Frutti was Recorded in New Orleans at the time when Chuck Berry & Fats Domino were already on the charts. Little Richard was timid at first, as seen in this video. But his flamboyant style and trademark “whoooo” scream influenced every rock n roller from then on, including the Beatles, which if you listen closely, there’s a “whoooo” in many of their songs. Where do you think they got that?

This song hit the top 5 on the R&B, Pop, and County charts simultaneously after it was released in 1957, and Jerry Lee Lewis performed the smash hit “Great Balls of Fire” on the Steve Allen show in June. Before that, the song was slowly becoming an underground phenomenon in the clubs and road houses in the South.

Another hit recorded at Sun Studios, the studio never paid out the millions of dollars owed to Jerry Lee Lewis, but Jerry Lee never bothered to sue because he said that money wasn’t that important to him, it was all about the music.

There has to be a Dark Side stirred in

A song that’s tough, and solid, and telling it like it is, Carl Perkins suggested the title, when Johnny Cash sang about being faithful to his first wife with this song “I Walk The Line.” He would hum at the beginning of each verse, Johnny said, because the song changes key, although it adds an eerie tone to the lyrics.

Written by dishwasher repairman/steel guitar player Tommy Durden, sung by Elvis in exchange for songwriting credits, it is rumored that this song was inspired by a suicide note left behind by a man who wrote: “I walk a lonely street.” On the radio, no one could tell if Elvis was white, or black, but at a live performance, an excitable shock ensued when Elvis started his revolving shaking, never seen before in white suburban 1950’s America. Here’s the beginning of the gyrations with “Heartbreak Hotel”

Served up with little Rebellious Controversy

A college frat party favorite, the unintelligible lyrics were rumored to be obscene, offering notoriety and an FBI investigation, along with the popularity of this song written by Richard Berry in 1955. There was nothing lewd about the lyrics after all: if you listen closely to the Kingsmen recording of “Louie Louie” you may learn about a sailor singing about his girl in Jamaica, and longing to see her during a 3 day trip at sea.

What better song to drink a beer to, and celebrate with your college buddies in a toga?