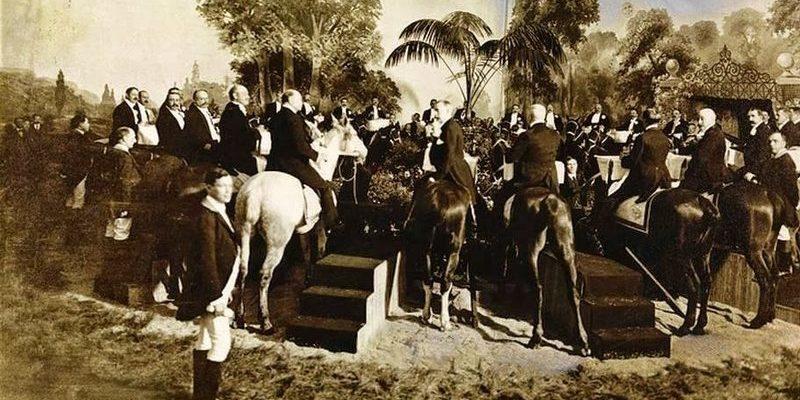 C.K.G. Billings turned a Manhattan ballroom into a site for a banquet on horseback.

Millionaire C.K.G. Billings loved horses and a fine meal. So on March 28, 1903, he combined the two and hosted an opulent dinner on horseback for 36 of his closest male friends.

The dinner was supposed to take place at the luxe new French chateaux-like estate he’d built for himself near Fort Tryon Park. But once reporters heard about it, Billings secretly switched the location to Sherry’s, then the city’s ritziest restaurant on Fifth Avenue and 44th Street. A black-tie dinner on horseback

C.K.G. Billings, a horse-racing fanatic who the New York Times called “the American Horse King,” spent thousands of dollars transforming a Manhattan ballroom so he and his friends could eat on horseback.

Cornelius Kingsley Garrison Billings inherited a gas company, but his passion was racehorses. A famous equestrian, Billings built a $200,000 private stable next to the Harlem River Speedway, a track for horse and carriage racing that opened to cars in 1919. The luxurious stable included two exquisite suites for Billings and guests in the upper story and a training ring for show horses. Billings wanted to celebrate the finished stable with a banquet.

The event was a prime example of gilded-age excess. Sherry’s ballroom was made to mimic woodlands, complete with dirt on the floor. The horses were brought up via an elevator and had dinner trays attached to their saddles. Each horse had feedbag of oats to chomp on as well. Courses were served by waiters dressed as grooms; guests drank champagne through rubber tubes.