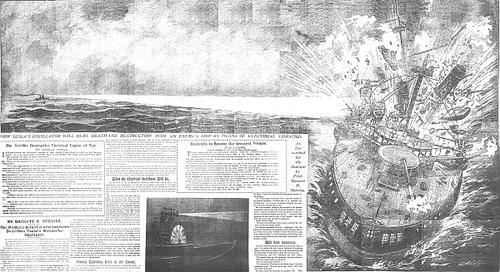 In 1900, Tesla began his Wardenclyffe Tower on Long Island (the lab was on the north shore of Long Island about 5 miles away from where I lived for 32 years. I visited the closed lab frequently and it has since gotten funding and will be turned into a museum). Below might be the rantings of the “mad scientist” version of Nikola Tesla, although he never did get the chance to test out his theory of energy transmission across the Atlantic to Europe. Could the following idea have worked? Well maybe not in time to make a difference in preventing/ending the Spanish-American War but I do think it may not be so crazy as it may seem. Or maybe it was a plan to scare Spain? But was it practical? Maybe not in 1898 with the estimate of power that it would need to generate the electric waves of great destruction that he describes, but now?

I am perfecting an electrical engine of war which I am about to offer to the Government. It is to exert such a terrible force as to disable war ships and powerfully affect vast armies on land at great distances.

If this device acts as effectively on a large scale as it does in my laboratory, the results will be incalculable. When put into operation it will tend to bring war to a speedy end by reason of its unlimited power of extermination.

It is the application of the principle of oscillating waves. By this means electrical currents of high potentials can be sent out in all directions and aimed against the vulnerable part of a hostile army or war ship.

Five years ago I discovered that electrical vibrations produced by a novel kind of apparatus, which I have since considerably improved, may be propagated through the earth and through the air, and from experimental data I have calculated that such vibrations can be propelled a distance equal to the diameter of the earth. To effect this an expenditure of energy of about five hundred horse-power is needed, although this estimate may not be quite true, as there are a number of uncertain quantities in the calculation.

I intended to use the principle primarily for the transmission of signals over great distances, but soon I saw that something of greater importance could be accomplished by its use.

The only way to insure the action was to construct apparatus on novel principles which would make possible the production of waves of many hundred times greater intensity.

I foresaw long ago that, despite the strenuous efforts of the President to maintain peace, war would break out and I have concentrated my energies upon perfecting these devices and rendering them immediately available.

This, in fact, is the only reason why I have not, up to this time, offered my services as a volunteer, which I would certainly have done under other circumstances. In this respect, I may say, I have already formed definite plans.

Although the United States have taken energetic measures, and are determined to bring the difficulty to a speedy termination, I fear that the war will be prolonged, and it will become all the more important to apply improved electrical measures and contrivances.