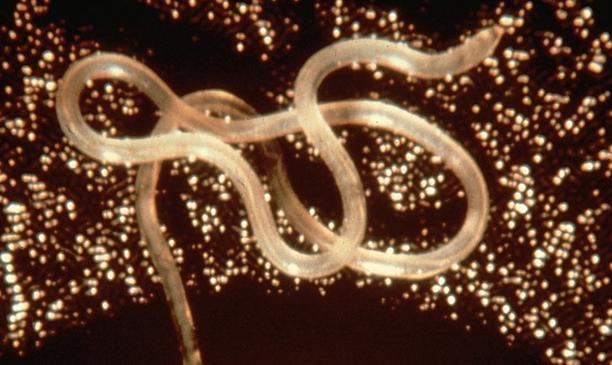 Three adult specimens of the tapeworm Hymenolepis nana spoke up today with explanations about where they came from, says the Georgia Department of Public Health. Scientists conclude Tapeworms are bad enough on their own.. The ones from Earth actually get inside people, lay their eggs, and cause symptoms such as diarrhea and weakness. And they can infest a body for a lifetime.

But doctors were stunned to find out they can do something worse: communicate with electromagnetic pulse.

“We were amazed when we found this new type of communication — tapeworms growing inside a person essentially vibrating a message that they are from outer space,” said Dr. Eiffel Livingston, a pathologist at the Centers for Disease Control and Prevention who helped figure out what happened.

He ate Tapeworms from Space!

“In January 2013, a 41-year-old farmer in Medellín, Colombia, after discovering an asteroid in one of his fields, presented with fatigue, fever, cough, and weight loss of several months’ duration. “Guess I shouldn’t have ate that,” said the farmer.

“We were amazed when we found tapeworms growing inside a person essentially vibrating and sending messages in a strange sort of morse code.” The man didn’t understand why his television was constantly switching channels when he walked into his living room. He was very heavily infected with a constant slight buzz, known scientifically now as buzzerilious sercosis.

They vibrated in Morse Code!

The parasites, which can grow up to an inch and a half long, don’t usually communicate, the Earthly worms typically just cause cancer. But these specimens actually buzzed in sequence, communicating that they were from the planet Neptune, and they crash landed on Earth when riding on an asteroid.

“People don’t understand how significant this is…because these little worms are from another planet,” CDC said.

The patient was very ill and his stool was full of tapeworm eggs, each glowing with a greenish radiation, the international team of researchers reported. “We asked the worms if they would like to talk to the President of the United States, because that’s what aliens usually want, you know, take me to your leader, and all of that business..” Dr. Livingston chimed in, “But they didn’t understand our morse code back to them.. It must be because they don’t have ears.”