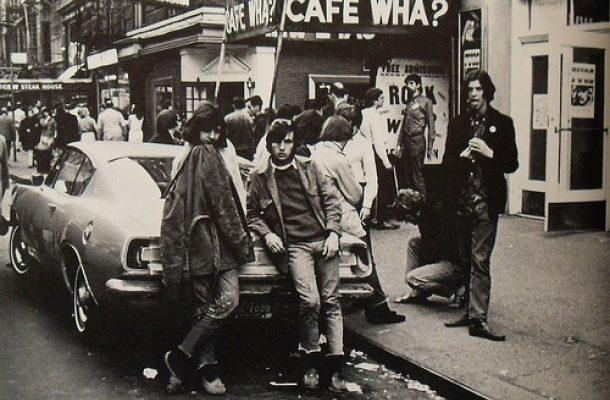 The 60’s scene in Greenwich Village may now be long in the dust, but dig this daddio, the scene, a groovy get together place for hip chicks and cool cats to chill and shuffle along diner dives, beatnik hotspots, and hipster hangouts was most definitely where it’s at.

The Village stretches from the Hudson River Park east as far as Broadway, and from West Houston Street in the south up to West 14th Street. But five decades have passed since America’s troubadours and beat poets flocked to Greenwich Village, filling its smoky late-night basement bars and coffee houses with folk songs and influencing some of the most recognizable musicians of the era.

The original Cafe Wha? still remains at 115 MacDougal Street, on the corner by Minetta Lane. In the bitter winter of 1961, cash-strapped artists would take their chances at the open mic. It was here that Bob Dylan made his New York debut, and Allen Ginsberg and Jack Kerouac performed. Cafe Wha? continued to attract artists and musicians long after the Village folk scene gave way to rock’n’roll. A notice on the door catalogues a few of the famous names who played here: Jimi Hendrix, Ritchie Havens, Jerry Lee Lewis, Little Richard and the Velvet Underground.

The hippest hangout in the 1960s East Village

You know how everyone always complains that a once-cool bar or club has been ruined because it’s been discovered by bridge-and-tunnel types? The Dom was once the East Village’s hippest nightspot—run by Stanley Tolkin, proprieter of Beat hangout Stanley’s bar on Avenue B and 12th Street.

When exactly it opened depends on what book or article you read, but it seems to have hit maximum hipness in the mid-1960s. The Dom apparently wasn’t one space but an upstairs dance club/performance art area plus a downstairs bar/restaurant.

Jim Marshall lived in Greenwich Village in the early 1960s and was on his way to breakfast with folk singer Bob Dylan when he captured this image.

Dylan dropped out of college in Minnesota in 1961 to move to Greenwich Village in New York, where he drank coffee and wrote poetry by day and performed in the district’s Gaslight and Gerde’s venues by night, where at the end of each performance a hat was passed around for tips. A year later in 1962, Dylan caught the eye of a reporter from The New York Times who was at Gerdie’s during one of his performances. The ensuing feature on the artist struck not only the attention of other club owners in New York, but Columbia Records as well.

Greenwich Village was, and still is generally known as an important landmark on the map of American bohemian culture. The neighborhood is known for its colorful, artistic residents and the alternative culture they propagate. Due in part to the progressive attitudes of many of its residents, the Village has traditionally been a focal point of new movements and ideas, whether political, artistic, or cultural.

The bohemian scene grew in the 1950s, when the Beat Generation focused their energies there. Fleeing from what they saw as oppressive social conformity, a loose collection of writers, poets, artists, and students (later known as the Beats) and the Beatniks, moved to Greenwich Village, and then to North Beach in San Francisco. The Village (and surrounding New York City) would later play central roles in the writings of, among others, Jack Kerouac, Allen Ginsberg, William S. Burroughs, James Baldwin, Truman Capote, Marianne Moore, and Maya Angelou.

But digging up the chronicles of rock n roll in the 1950s and 1960s, one has to swing through this little burg where folk music blossomed, where clubs and coffee houses showcased singers like Pete Seeger and Odetta and nurtured a generation of newcomers, among Bob Dylan were the likes of Judy Collins, Ramblin’ Jack Elliott, and Peter, Paul and Mary.

Greenwich Village, aka “the Village“, is a neighborhood on the west side of Lower Manhattan, New York City. Greenwich Village has been known as an artists’ haven, the Bohemian capital, and the East Coast birthplace of both the Beat and ’60s counterculture movements.

But just to give you the Quick Run-Down

Just outside on the streets, the music clubs had hipsters sitting on the stoops along the walks and inside the establishments that included Gerde’s Folk City, The Bitter End, Cafe Au Go Go, Cafe Wha?, The Gaslight Cafe and the Bottom Line. Three of the four members of The Mamas & the Papas met there. Guitarist and folk singer Dave Van Ronk lived there for many years. Usually developments in the Village would influence the simultaneously occurring folk rock movement in San Francisco and elsewhere, and vice versa.

If you can stomach an old documentary, 12 minutes long, you’ll get the drift of the village.. so, dig this my young wanderer…