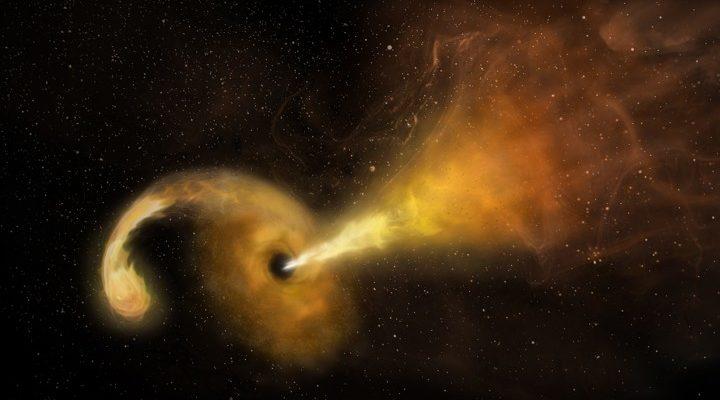 Artist’s depiction of a black hole eating a nearby star In 2005, astronomers detected a burst of infrared light coming from the heart of a galaxy nearly 150 million light-years from Earth. They had been studying the night sky for supernovae, the glittering explosions that mark the deaths of stars, but this seemed different. Intrigued, they decided to keep an eye on it.

After years of observations, the astronomers have determined the source of this burst was indeed the death of a star. But the star hasn’t exploded. It’s being eaten.

The star drifted too close to a supermassive black hole, the vacuum cleaner of the universe. The black hole’s fierce gravity dragged the star toward its invisible mouth, toward a point from which nothing, not even light, can return. The tugging stretched and shredded the star, producing a bright tail of light that could be detected by powerful telescopes on Earth.

An international team of astronomers—led by Seppo Mattila of the University of Turku in Finland and Miguel Pérez-Torres of the Astrophysical Institute of Andalusia in Spain—tracked this event over the course of a decade. Six years into their monitoring, the glow of light began to change shape and lengthen—a tell-tale sign that this wasn’t a one-off star explosion.

Their observations produced a ghostly image of this violent cosmic meal. The discovery, described in a paper published Thursday in Science , marks the first time that astronomers have directly imaged the formation and shape-shifting expansion of the jet of stellar material that forms when black holes devour stars.

The stellar debris grows brightly as it swirls around the black hole, emitting light across many different wavelengths. This interaction occurred at the site of another cosmic mashup: in one of the galaxies that makes up a pair of colliding galaxies known as Arp 299, and their colleagues first spotted the light from the black hole’s dinner with the William Herschel Telescope in the Canary Islands […]