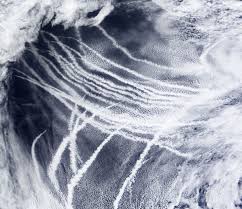 Even though it sounds like science fiction, researchers are taking a second look at a controversial idea that uses futuristic ships to shoot salt water high into the sky over the oceans, creating clouds that reflect sunlight and thus counter global warming.

University of Washington atmospheric physicist Rob Wood describes a possible way to run an experiment to test the concept on a small scale in a comprehensive paper published this month in the journal Philosophical Transactions of the Royal Society.

The point of the paper — which includes updates on the latest study into what kind of ship would be best to spray the salt water into the sky, how large the water droplets should be and the potential climatological impacts — is to encourage more scientists to consider the idea of marine cloud brightening and even poke holes in it. In the paper, he and a colleague detail an experiment to test the concept.

“What we’re trying to do is make the case that this is a beneficial experiment to do,” Wood said. With enough interest in cloud brightening from the scientific community, funding for an experiment may become possible, he said.