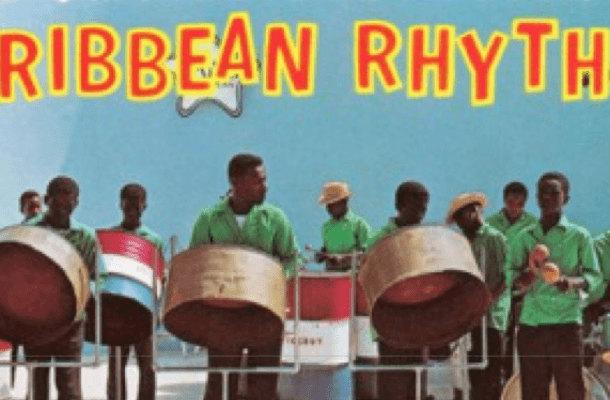 Steel Drum Sounds from the Island is a short essay on the the phenomenon known as Steel Pan. From it’s origins as a street corner past time, to it’s grand stage performances of today, the steel drum sound continues to carry the back round sound track to weddings and tiki bars around the world.

Steel Pan music was born in Trinidad in the late 1930’s and early 1940’s, the sounds were first considered coming from a banned “outlaw instrument” which was hammered from milk tins and oil barrels that were scattered around the islands and left behind by US army during and after World War II.

By the end of the 1940’s, each pocket neighborhood around Trinidad had it’s own Pan Band sporting names like: “Casablanca”, “Destination Tokyo”, and “Desperadoes”  Band names came from War and Western movie titles of the day. They battled with each other for notoriety… and to claim the rights to boast as the “best pan band in the land,” especially during Carnivale time in and around the Port of Spain.

Every year, the best of the best Steel Drum Bands get together at the national “Panorama” and have a play-off for the national title. This year, like many others, the groups come together to show off their performances, with respects to styles, and a tip of the hat to the arrangers.

Here’s last year’s winner, and this year’s winner for 2012 in the annual contest called the Panorama finals at the Queen’s Park Savannah in Port-of-Spain, Trinidad. As you can see and hear, the energy is high and the competition was fierce.

Pinning neighborhood against neighborhood on the island, Trinidad’s sister island brought forth the winning sounds of this steel band in what’s called the medium category.

To get a little history of this musical “sport” I found this timeline called “The History of SteelPan” Apparently, these friendly neighborhood rivalry’s end up emotionally charged and become violent at times, with peace treaties being signed after dangerous uprising in clashes between groups, which have banned some official competitions over the years and banned steel drum playing publicly.

The composers, arrangers, the players, and even the manufacturers of these Steel Drums often become celebrities and power players in their own right around the islands. Homage is payed to the long standing groups that basically invented the circuit many decades ago.

Unfortunately, the turf wars brings to mind the outrageous conventions of East Coast vs. West Coast Rappers touting “thug life” in the concerts but all the while getting shot at in the streets.

Times have changed, and still they have not changed. As the Steel Bands migrate to other countries, with them they bring their instruments, but also bring their turf war cultures with them. In New York around the year 2000, there was plenty of action and cross town rivalries between SteelBands.  Known as “The Steel Band Raids” violence erupted as the rival bands prepared for the annual Labor Day West Indian Carnival in Brooklyn New York.

For young men living in the downtrodden areas of the city, to become a member of the local Steel Band is an honor, and an escape to a better life.

The famous piano showman Liberace “discovered” the Trinidad Tripoli Steel Band while on tour, and was so taken by the sound and the talent, he asked them to go on a 2 yr. tour with him. Here was one flamboyant rhinestoned white piano virtuoso player with 27 black Trinidadian steel pan players, traveling America, touring the 1960’s segregated Southern United States.