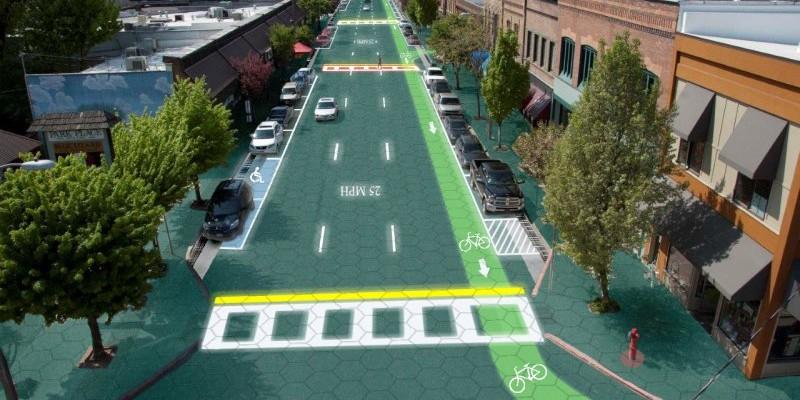 “The inventors are looking for $1 million to keep testing technology they claim could power the United States three times over.”

Four years ago, Scott and Julie Brusaw announced their provocative concept of “Solar Roadways,” a system of modular solar panels that could be paved directly onto roads, parking lots, driveways, bike paths, “literally any surface under the sun.” Since then, the Brusaws have received two rounds of funding from the Federal Highway Administration as well as a private grant to develop their project.

They now have a working prototype featuring hexagonal panels that cover a 12-by-36-foot parking lot. In addition to the potential to power nearby homes, businesses, and electric vehicles, the panels also have heating elements for convenient snow and ice removal, as well as LEDs that can make road signage. According to the Brusaws’ calculations, Solar Roadways, if installed nationwide, could generate over three times the electricity currently used in the United States.

Before you ask—the panels have indeed been tested for traction, load testing, and impact resistance. It’s supposed to withstand a 250,000-pound load, typical of the heaviest trucks. For starters, here’s footage of a tractor driving over the prototype.

In their current Indiegogo campaign, the Brusaws are trying to raise $1 million to help move Solar Roadways into production and start installing additional projects. With the campaign only 8 percent funded so far, their plan faces a long road ahead.

All images courtesy of Solar Roadways on Indiegogo.