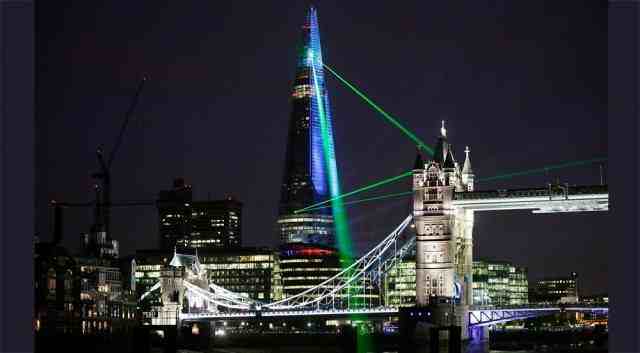 A new technology is being developed for harvesting lightning bolts from storms and divert them to a ‘targeted’ position for potential storage of electricity. High rise structures are natural targets of high potential for electrical discharge. Lasers would then be used to channel that high voltage pulsed DC current to ground at remote locations. Targeting systems are essential to accurate dissipation of the pulse without accidental misfire. Thereby causing collateral damage.

“According to scientists, shooting a laser beam in the path of lightning could help divert it from the building. Michael Keller at Txchnologist explains:

“University of Arizona and University of Central Florida optical scientists say such beams of high-energy focused light can strip electrons from molecules in the air. This ionizes the molecules and leaves behind a plasma channel, which a lightning strike would see as a path of least resistance. This would attract the lightning and provide a route that it would follow down into the ground.” “This technique allows the plasma column to be extended by “at least an order of magnitude.” In the lab, they increased the length of the plasma column from 10 inches to seven feet — in the real world, they think they could get to 165 feet. The idea is that, instead of sticking a lightning rod on top of the building, you would instead use a laser to produce a high-conductivity plasma channel. The researchers haven’t got as far as working out what a real-world installation would actually look like, but they seem positive that there are real, exciting applications for these refuelled optical filaments. If lightning really likes these plasma channels, there might also be a possibility of using them to guide the lightning towards some kind of energy harvesting apparatus.”

“The use of ultraviolet (UV) laser pulses as the appropriate means for laser-induced lightning discharge. An analytical solution based on Maxwell’s equations has been developed for UV filamentation in air, arising from a dynamic oscillating balance between self-focusing, diffraction and plasma defocusing. This model suggests that UV (220-420 nm) 200 ps laser pulses with a peak power of around 50 MW (or 12.5 mJ input energy) and a beam size of 100 µm are the optimal tool to trigger outdoor lightning. The laser beam size remains relatively small (less than 0.3 mm) after a propagation distance of 200 m up into the normally cloudy and damp atmospheric conditions.”

Article from “A Microwaved Planet”