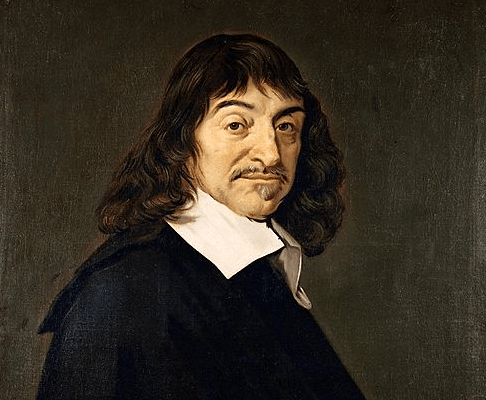 Rene Dscartes was born in France, and at the age of twenty two moved to Holland, spending most of his life there. He studied mathematics, philosophy, physics, psychology, physiology, and cosmology. A deep thinker, he influenced all of these areas with his writings. At a time before the ‘scientific method’ was still being sought after, when science was still based on experience, rather than deduction, (at that time, people still thought the Earth was the center of the Universe, as this was their ‘experience’) Descartes moved his thinking forward by questioning everything, including doubt itself, to the test of doubt.

“never to accept anything for true which I did not clearly know to be such.”

He was a very solitary man, and argued that most of the awesome things in the world were developed by single masters, rather than a group of people messing it all up together. An entire village can be built by many, for example, with their many different ideas, each one building upon, but at the same time, taking away from, others’ ideas in a mish mosh of patchwork. On the other hand, one single architect can put together a master plan, which usually results in a superior community.

Rene Descartes developed a method of critical thinking that provides for logic, and reason, but for a step by step method to follow, when questioning everything. His frequently quoted “I think, therefore, I am“ (Cogito, ergo sum) is offered by him as a certainty from which he builds his methodology of critical thinking. Modern science started with Rene Descartes, in that, he strove to create a methodology of thinking: Critical Thinking that was based on the deduction of knowledge, rather than the experience of it. He had a fierce conviction for not failing in his thinking, which led him to the following method. From his most notable essay ‘Discourse on Method‘ he teaches future readers how to be a better Conspiracy Theorist:

“I believed that the four (rules) following would prove sufficient for me, provided I took the firm and unwavering resolution never in a single instance to fail in observing them:

In this book, published in the year 1637, Rene Descartes uses this method of critical thinking in talking about the various subject areas of mathematical and philosophical thought. In his time, what were considered

“Conspiracies of his Age:“

The theory that blood “circulates” in the human body by heat, rather than muscle.

That the Earth is NOT the center of the Universe, it’s actually a planet going around the Sun.

He touches on the idea that light travels through Time.

“I know how very liable we are to delusion in what relates to ourselves; and also how much the judgments of our friends are to be suspected when given in our favor.”

“Of philosophy I will say nothing, except that when I saw that it had been cultivated for so many ages by the most distinguished men; and that yet there is not a single matter within its sphere which is still not in dispute and nothing, therefore, which is above doubt, I did not presume to anticipate that my success would be greater in it than that of others.”

“…And although my speculations greatly please myself, I believe that others have theirs, which perhaps please them still more.”

“The first was to include nothing in my judgments than what presented itself to my mind so clearly and distinctly that I had no occasion to doubt it.”

“The most widely shared thing in the world is good sense, for everyone thinks he is so well provided with it that even those who are the most difficult to satisfy in everything else do not usually desire to have more good sense than they have….”

Rene Descartes influence science and mathematics with his many ideas. The most important influence, however, was the first idea of the four, which states, in Descartes words,“never to accept anything for true which I did not clearly know to be such.”

This method of pro-foundational skepticism is considered by some to be the start of modern Conspiracy Theory.