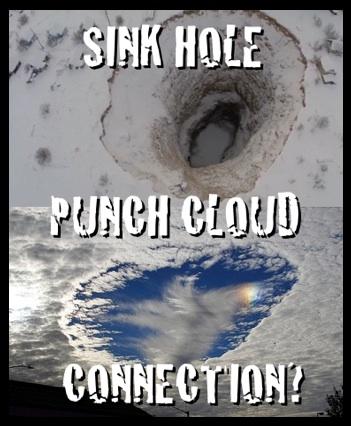 Researchers are now looking into an intriguing connection between two fascinating and ever increasing environmental anomalies: the punch cloud in the sky, and the sink hole below in the earth. Could the punch clouds be caused by EMF emitting satellites? Could the ground below get loosened by a direct shot from a directed energy weapon? The Tunguska event took place on the morning of June 30th, 1908. An explosion estimated to be equivalent to 10-15 megatons of TNT flattened 500,000 acres of pine forest near the Stony Tunguska River in central Siberia. Whole herds of reindeer were destroyed. The explosion was heard over a radius of 620 miles. When an expedition was made to the area in 1927 to find evidence of the meteorite presumed to have caused the blast, no impact crater was found When the ground was drilled for pieces of nickel, iron, or stone, the main constituents of meteorites, none were found down to a depth of 118 feet.

Many explanations have been given for the Tunguska event. The officially accepted version is that a 100,000 ton fragment of Encke’s Comet, composed mainly of dust and ice, entered the atmosphere at 62,000 m.p.h., heated up, and exploded over the earth’s surface creating a fireball and shock wave but no crater. According to researchers, the historical facts point to the possibility that this event was caused by a test firing of Tesla’s energy weapon. In 1907 and 1908, Tesla wrote about the destructive effects of his energy transmitter. His Wardenclyffe transmitter was much larger than the Colorado Springs device that destroyed the power station’s generator. His new transmitter would be capable of effects many orders of magnitude greater than his Colorado electrical device. In a 1934 letter from Tesla to J.P. Morgan, uncovered by Tesla biographer Margaret Cheney, seems to conclusively point to an energy weapon test In an effort to raise money for his defensive system he wrote:

“The flying machine has completely demoralized the world, so much so that in some cities, as London and Paris, people are in mortal fear from aerial bombing. The new means I have perfected affords absolute protection against this and other forms of attack… These new discoveries I have carried out experimentally on a limited scale, created a profound impression.” -Tesla

The evidence is circumstantial but, to use the language of criminal investigation, Tesla had motive and means to be the cause of the Tunguska event.

Could a modern day usage of Tesla’s patents be the cause for punch holes and sink holes?