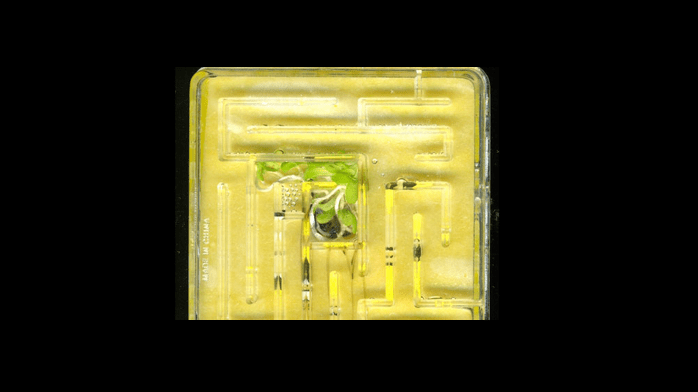 Computer scientist Andrew Adamatzky of the University of West England did a series of tests with four-day-old lettuce seedlings. To create bio-wires, he bridged two electrodes made from conductive aluminum foil with a seedling that was placed onto the electrodes in drops of distilled water.

Next, he applied electrical potential between electrodes ranging from 2 to 12 volts, and calculated the seedling’s so-called potential transfer function that shows output potential as a fraction of input potential — the amount of energy produced relative to energy put in. [Super-Intelligent Machines: 7 Robotic Futures]

The future of computing might just come from slime molds! Turns out these uber smart, super weird molds can do things that even our most advanced computers can’t handle. Anthony explains why they’re so cool, and what it might mean for next-gen tech.
He found that resistance of the seedling repetitively changed with time, or oscillated. He determined that, roughly, the output potential was 1.5-2 V less than the input potential, “so by applying 12 V potential we get 10 V output potential,” he said.

This meant that the resistance showed aperiodic oscillations, and thus, the wire was “somewhat noisy.” Such noise, he admits, is not ideal for creating sensors, because energy gets wasted. But once new methods are developed for reliable routing of the plant roots between living and silicon components, it may be possible to incorporate plant wires into bio-hybrid self-growing circuits.

For such a leap to happen, researchers will have to “find a way of navigating plant roots in labyrinths,” Adamatzky writes in his paper, detailed in a pre-print published on the Arxiv website.

Almost any living creature, including humans, can conduct electricity and therefore be used as “wires,” Adamatzky said. The problem is, not all creatures can remain motionless and without degrading for a long period of time. [Magnificent Microphotography: 50 Tiny Wonders]

But plants can — provided they get enough light, water and minerals.

Previously, Adamatzky and his team tried to use slime mold as a computing medium, but the resulting sensors and processor were “very fragile, highly dependent on environmental conditions and somewhat difficult to control and constrain.”

So they searched for less shifty alternatives, deciding to go with plants, because they are “in general, more robust and resilient, less dependent on environmental conditions and can survive in a hostile environment of bio-hybrid electronic devices longer than slime molds do,” Adamatzky said.