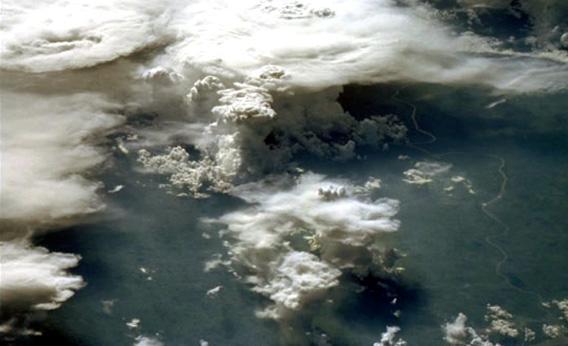 Narrator: Aerosols are suspended throughout Earth’s atmosphere and the tiny varied particles play a mysterious role in human-induced climate change. Just like people, every particle is unique. Sometimes aerosols occur naturally from things like volcanoes. But they can also originate from human activity.

Aerosols are short-lived but have an active lifetime. In just a short expanse of time, particles can change their size and composition and even travel across vast oceans.

Aerosols are difficult to study and one important new area of research involves how these particles impact clouds. Without aerosols, clouds could not exist.

Narrator: The introduction of too many aerosols wil modify a cloud’s natural properties.

Mischenko: The more aerosol particles we have in the atmosphere, the more cloud droplets we can have.

Researchers are still working to understand the role of these curious particles.

Mischenko: We need to study the distribution of particles globally and the only way to do that is from satellites.

Narrator: New tools will soon help scientists study aerosols. The Aerosol Polarimitry Sensor, or APS, is among a suite of instruments on-board NASA’s upcoming Glory mission. The APS will provide a global dataset of aerosol distribution with unprecedented accuracy and specificity.

Unique data from the Glory mission, along with NASA’s fleet of Earth-observing satellites will help researchers investigate the intricacies of Earth’s changing climate.