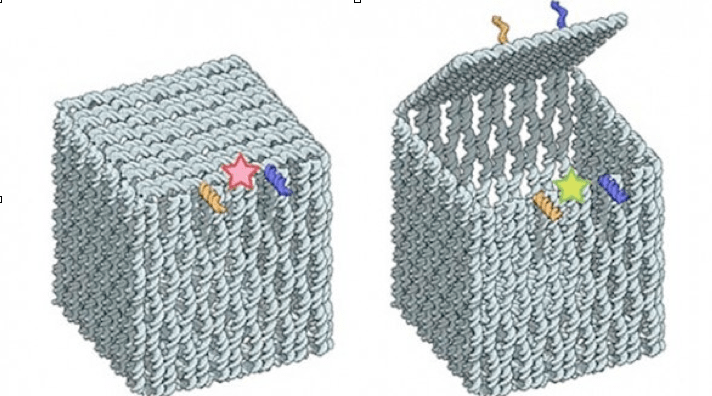 Scientists are now looking at ways to fold your DNA molecules into different shapes that open and close on demand. The idea is to contain some kind of drug in a box, and then release it, as the “Oragami DNA” opens like a lid to a box containing the desired drug.

“The lines between biology and engineering are blurring everyday”

The lines between biology and engineering are blurring further every day. Mechanical implants can carry signals across gaps in severed nerves, while microorganisms push steadily into manufacturing and materials synthesis. Still, in a new study published this week, the use of the phrase “nano-robot” is a bit overzealous. What we have here is an exquisitely accurate way of targeting drugs within a living body, and a new model for control of injected material — but robots?

This study makes use of the fact that DNA is an inherently programmable molecule; most people know that A(denine) binds to T(hymine) and that C(ytosine) binds to G(uanine). This simple principle, together with an ability to build custom DNA strands from scratch, lets scientists design A-C-T-G sequences that create very specific patterns of inter- and intra-strand binding. This means that researchers can design DNA molecules which “fold” into incredibly complex three-dimensional shapes — this is how the term “origami” came to be associated with the biotech industry.

We’ve been making DNA into rough 3-dimentional structures for many years, now.

This study created a number of different DNA constructs, similar in shape but distinct in function. They all form sort of a hinged box structure capable of holding some drug molecule and opening or closing on demand. Where they differ is in specifically which command they will heed, and in what way — and this is where the term “robot” comes in. Basically, these researchers have created a physical, molecular metaphor for the most basic logical gates in computer programming: AND, NAND, OR, XOR, NOT, CNOT, and more.

Where things really get interesting is in how these functions could one-day be linked together to form complex chains of cause and effect — here, we finally start to see a glimmer of the sorts of computational processes this study insists it has created. As seen in the figure, an interdependent system of drug-carrying DNA boxes could respond accurately to very complex mixtures of input signals, or simultaneously control the delivery of multiple drugs in a single tissue. It could be used in signal transduction, outputting not a therapeutic drug but a signalling molecule to alert scientists or doctors of a particular biochemical event.

This is an extremely robust system, and one that seems to produce good results in strictly controlled drug delivery, but ultimately it is still just based on well-designed drug delivery molecules. All the comp-sci metaphors in the world won’t change that fact, nor make the basic molecular logic underlying this study any more “robot-like” than older DNA technologies. The computational logic on display here is not remotely uncommon in biochemistry; it’s only by treating DNA like an algorithm that we were able to design complex folding strands like these in the first place.

Fuzzy, but effective: Micrographs of just a few of the team’s DNA constructs.

This study used cockroaches as its model organism, choosing the insects for their small size (very little blood to saturate with the experimental material) and for the relatively low levels of degradative enzymes in their blood. In humans, more robust forms of DNA would be necessary to make these constructs durable; the catch-all term XNA encompasses engineered versions of DNA that have been reenforced against temperature, pH, enzymatic activity, or just about anything else.

It’s no coincidence that DNA has generated so much interest among biomedical engineers, lately; the simple, robust logic that allows four simple nucleic acids to collectively underlie all of life’s variety can be leveraged just as effectively by science. DNA is easily designed, built, and inserted into living organisms — and best of all, it plays nicely with the biological systems it finds there. DNA “robots” like those on display here could very well be our main mechanism of control over DNA genomes.

Ultimately, the computational metaphor used here is much stronger than the robotic one. A complex and reliable enough system of interdependent units could, for instance, allow a very small variety DNA robots to distinguish between a very large variety of diseases. It might also be possible to control biology with that same deep, computational level of specificity — and while it might be tempting to call this a “bio-computer,” it is in reality a wholly new technology that has promise all its own.