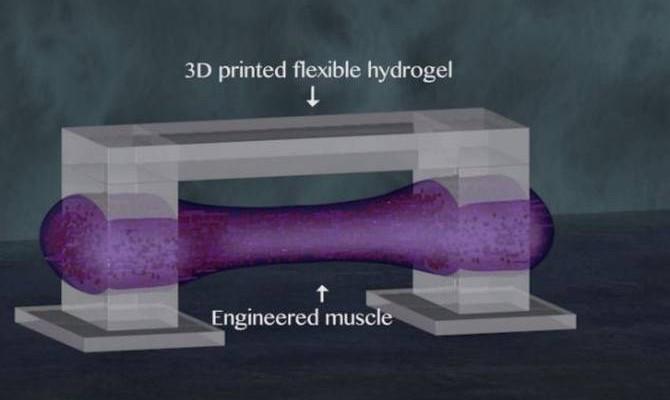 A tiny walking bio-bot (video) that is powered my muscles, whose backbone is made of hydrogel, is harnessed using an electrical impulse to propel the small bot forward. Modeled off of a muscle-tendon-bone system found in mammals, researcher Caroline Cvetkovic at the University of Illinois at Urbana-Champagne says that this is relevant because it allows for the bio bot to mimic the way natural systems use energy to produce force and motion. When the muscle cells contract with applied electrical stimulation, this produces a forward motion.

Two tiny posts, which act as the feet of the bio-bot, also anchor a small piece of muscle tissue, which is stretched between them. Contractions induced into the muscle by an electrical field allow the bio-bot to “walk,” at a speed which can be varied by changing the frequency of the electric current. The higher the frequency of the electric field, the faster the muscle’s contractions, which allows to bio-bot to walk faster.

The vision is  “a generation of biological machines that could aid in drug delivery, surgical robotics, ‘smart’ implants, or mobile environmental analyzers, among countless other applications.”