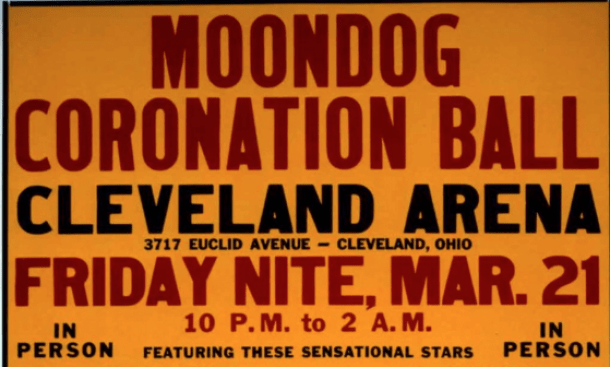 Alan Freed, DJ, Promoter, and all around Dangerous Rock n Roll legend, was said to have coined the phrase “Rock n Roll” and bring this strange “Rhythm & Blues” to the masses. After promoting tickets on his radio show, the teenager gathered at the Cleveland Arena for howling night complete with police shut down after only 1 song at the famous “first rock concert” known as The Moondog Coronation Ball.

The Rock festival scene has a long and lurid history. And it’s not always easy trying to figure out exactly when a scene was born, but for Rock and Roll, the date was March 21, 1952. That was the date of the Moondog Coronation Ball, generally regarded as the birthday of Rock and Roll, hosted by none other than DJ Alan Freed.

This Rhythm and Blues music style wasn’t new, it had been popular in the black community for years. Alan Freed popularized the term “Rock and Roll” on his radio show. A local promoter named Lew Pratt, owner of the Record Rendezvous store, signed Freed on to publicize the event. More tickets were printed than the arena’s actual capacity, in part due to counterfeiting, and a printing error.

With an estimated 20,000 people in the crowd, in an arena that was designed to hold less than 10,000, the police & fire departments feared riots and for safety reasons, closed the show down after the first and only song was played.

Here’s one of the only pictures I could find. It shows the crowd shoulder to shoulder in an arena that wasn’t designed to hold a show of that many people. Sound like a great precedent for Rock Concerts? Freed’s radio show was called Moondog’s Rock ‘n’ Roll Party, and he brought along his on-air persona “Moondog”. The coronation turned out to be for Alan Freed himself,  as he earned the title “King” of Rock and Roll. It was a great mix for promotional purposes, using Freed’s radio station and sponsors for promotion, they soon sold out the first printing of 7,000 tickets. The best tickets sold for $1.75.

Paul “Hucklebuck” Williams took the stage, and almost immediately the first fight broke out…the first Rock and Roll concert was shut down by the Fire Marshals after only one song. The Dominoes, Tiny Grimes, the Rockin’ Highlanders, Danny Cobb and Varietta Dillard were left backstage and never performed. Since Hucklebuck was famous for his Huckle Buck Boogie song, this may have been the one and only song played at the first Rock Concert. By today’s standards, this isn’t much to get the police to shut you down, eh?

Freed went on with much controversy to host his radio show. About 4 years later, there was a movie made about this strange “Rock n Roll” movement, and the movie was called “Rock Rock Rock. In this clip, we see the average 1950’s home with the caring mother and innocent child huddled in front of the television, with the cantankerous dad in the back, unamused, looking at the newspaper with pipe in grumpy mouth.

What may be one of the first Music Videos was this Chuck Berry introduction on Alan Freed’s Mr. Rock n Roll. Just kidding…not quite convinced of that, but, I just wanted to post this video to showcase the rowdy and raucous behavior that made Rock n Roll dangerous to the masses as if they sold their souls to the devil.