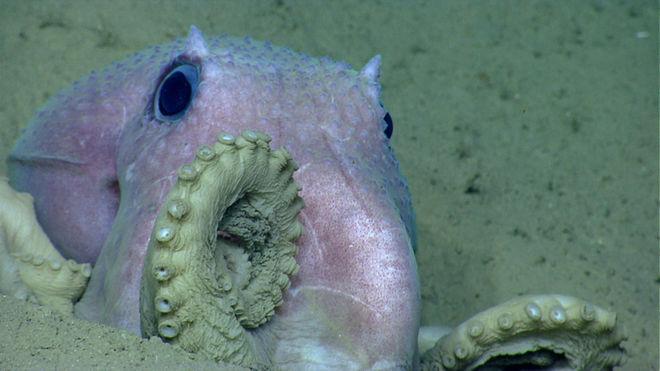 It has been estimated that there are 100 trillion individual bacterial cells in a single human body, and a nonillion (10^30) individual bacterial and archaeal cells on Earth, the researchers wrote Monday (May 2) in the journal Proceedings of the National Academy of Sciences. If these individuals represent a trillion or so species, that means very little is known about Earth’s microscopic denizens, Lennon said in the statement. The genomes of only 100,000 microbial species have been sequenced, and only about 10,000 species have been grown in a lab, he said.

Earth is home to gobs of species, from tiny to gargantuan, and ordinary to downright weird. Take this whimsical octopus spotted by NOAA Ship Okeanos Explorer’s remotely operated vehicle near Shallop in the Atlantic Ocean. Calculating how many species exist on Earth is a tough challenge. Researchers aren’t even sure how many land animals are out there, much less the numbers for plants, fungi or the most uncountable group of all: microbes.

Now, researchers have attempted to use the laws of math to make an estimate that includes both micro and macro life. The researchers estimated that there may be as many as 1 trillion species out there.

The research is based on scaling laws, which predict a proportional change linking two variables. For example, scaling laws apply to the change in metabolic rates as body size changes, and to the number of species found by geographical area.

Indiana University researchers Kenneth Locey and Jay Lennon analyzed data sources that sampled 20,376 sites for bacteria, archaea and microscopic fungi, and 14,862 sites for trees, birds and mammals. Using the total abundance of individuals, the researchers were able to work out the scaling rules that linked the number of individual organisms to the number of total species. “Until now, we haven’t known whether aspects of biodiversity scale with something as simple as the abundance of organisms,” Locey said in a statement . “As it turns out, the relationships are not only simple but [also] powerful, resulting in the estimate of upwards of 1 trillion species.”

Neurodope excerpt attribution reference for full article: There Might Be 1 Trillion Species on Earth