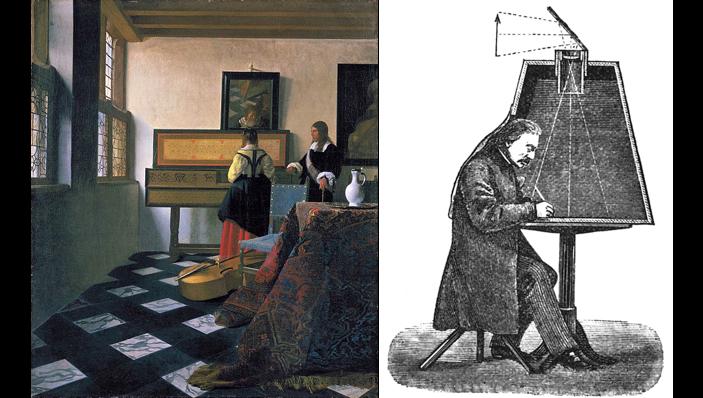 Were the master’s of painting in the Renaissance Era using an optical illusion to guide them along? Is the illusion of their “mastery” just a simple trick?

History places the dawn of the Renaissance in Florence, but in Bruge and Ghent were very sophisticated new cities. The royal Court and the Church were almost as rich as they were in Florence. Both the Church and the Court commissioned paintings. Jan Van Eyck was the Court painter.

He was not a humble craftsman. He ran a large workshop with many apprentices. He was an intellectual, a theologian, and a scientist. He is described by his contemporaries as an alchemist and credited with the invention of oil painting, yet he is classified as a “primitive era” artist.

You are totally knocked out by looking at this picture below. It’s unbelievably rich in detail in every single part of it: the textures of cloth, the book with a leather wrap, the small figures in the background that are made of wood. You can see everything about the textures of the cloths, the incredible detail in the bishops staff. Anything that is shiney is spotlighted.. the armor is polished, the gold thread in the bishop’s coat. The shines look amazing, and correct. Its almost like a photograph.

It was that photographic look, with the patterns on the clothes following the form of the body, as in this painting by Branzinno.. Giorgione is a famous Italian painter has a considerable amount of work during this time period. Here is a work showcasing the shine on the armor: There are descriptions of entire dark rooms with a lens called a Camera Obscura… which simply means “Dark Room”  With little more technology than a piece of glass, one could use the natural sunlight to project an image onto a canvas. (albeit upside down)

Click through this gallery of descriptions of a Camera Obscura: 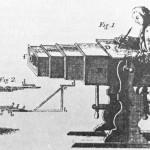 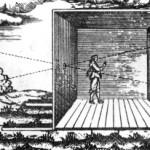 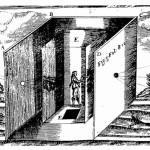 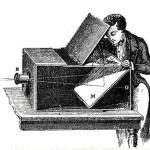 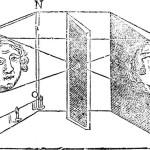 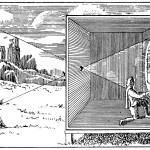 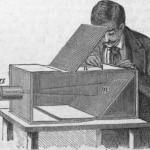 We know that many artists used the Camera Obscura. In fact, Reynolds, known as Sir Joshua Reynolds;  (1723 –  1792) was an influential eighteenth-century English painter, specializing in portraits, has his Camera Obscura in the Science Museum in London.

It folds up to look like a book, perhaps to keep it a secret?

But in the paintings of Vermeer done in the 1600’s, we see the most vivid use of optics. they have a photographic look. The basket, the map, the chandelier, the basket.  It is interesting that this particular room is used in many paintings, only the people and the furniture change, as if it were a stage being focussed upon by a Camera Obscura. Are the artists merely “tracing” an image projected onto a canvas?

Perhaps it is a mystery of the Masters that should be kept a secret.