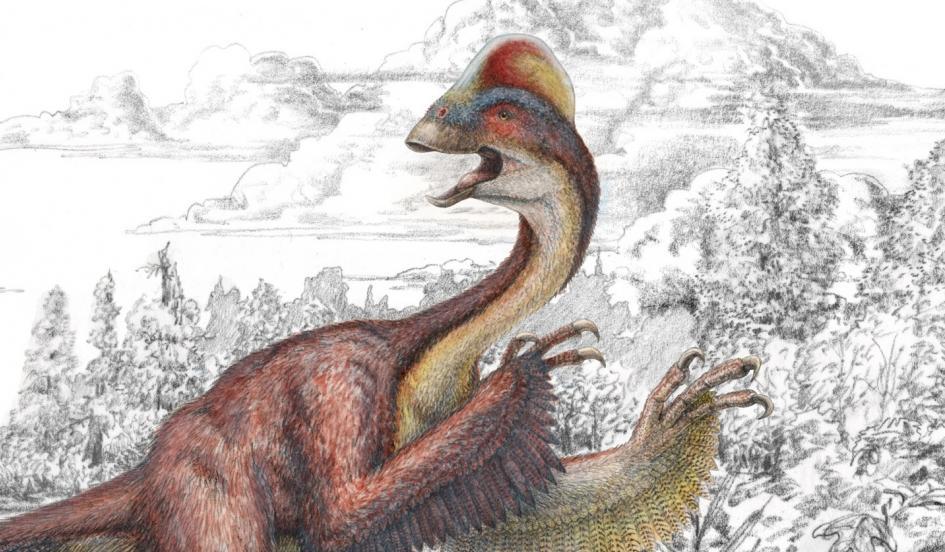 Share This:
Scientists have discovered a freakish, birdlike species of dinosaur — 11 feet long, 500 pounds, with a beak, no teeth, a bony crest atop its head, murderous claws, prize-fighter arms, spindly legs, a thin tail and feathers sprouting all over the place. Officially, it’s a member of a group of dinosaurs called oviraptorosaurs.

Unofficially, it’s the Chicken From Hell That’s the nickname the scientists have been using. It’s the term in the news release associated with the discovery. This dino-bird is not literally a chicken, or even a bird. It’s definitely a dinosaur, and it lived at the end of the Cretaceous period, from about 68 million to 66 million years ago.“It would look like a really absurd, stretched-out chicken,” said paleontologist Emma Schachner of the University of Utah, one of the scientists describing the new species.“It would have been a cross between a chicken and a lizard,” said Tyler Lyson, a paleontologist at the Smithsonian’s National Museum of Natural History, who excavated some of the fossils on his uncle’s North Dakota ranch in 1999.The fossils of three specimens of the new dinosaur were found in a sedimentary rock layer known as the Hell Creek Formation in three locations in North and South Dakota. The formation, the scientists said, helped inspire the nickname.But there’s also the matter of appearance: It’s an unsettling beast. It looks like it could stomp you, rip you to pieces or simply peck you to death. Chances are, once you have the image of the Chicken From Hell in your head, you will never think of it as anything other than the Chicken From Hell.

It’s a big animal, the biggest oviraptorosaur species found in North America. The creature brings to mind a huge flightless bird, such as an ostrich or emu. The weird crest on its head, which resembles half a dinner plate turned vertically, looks like that of a cassowary. The new dinosaur is loaded with biological accessories and adaptations, as if evolution had been inspired by a Swiss Army knife. “This group of dinosaurs looks really bizarre even by dinosaurian standards,” said Hans-Dieter Sues, another Smithsonian paleontologist and a co-author of the paper — “A New Large-Bodied Oviraptorosaurian Theropod Dinosaur From the Latest Cretaceous of Western North America” — published Wednesday in the journal PLOS One.

In the final line of “The Origin of Species,” Charles Darwin famously wrote of the “grandeur” of natural selection, through which “endless forms most beautiful and most wonderful have been, and are being, evolved” — but he never saw this animal from a Colonel Sanders nightmare.

The scientific name of the new species is Anzu wyliei — “Anzu” is from a mythological creature; “wyliei” is after the grandson of a patron of the Carnegie Museum of Natural History in Pittsburgh, which acquired the fossils and where the research has been conducted. Carnegie Museum paleontologist Matthew Lamanna, the lead author of the new study, and his colleagues spent close to a decade figuring out how the disarticulated bones of the three specimens fit together.

There aren’t many dinosaurs known from the end-Cretaceous period. This has led some scientists to argue that dinosaurs were petering out when the final whammy came in the form of a large asteroid that struck the Earth near the Yucatán peninsula.

But now comes Anzu, adding another genus to the dinosaur bestiary.

Anzu also reminds everyone of the birdiness of dinosaurs, and the dinosaur-ness of birds. Paleontologists can become dyspeptic when they hear that dinosaurs are extinct. Not so: Birds are dinosaurs.

Anzu is from the line of non-avian dinosaurs that went extinct at the end of the Cretaceous. Some of the birdiness of Anzu reflects “convergent” evolution, Lamanna said. Its ancestors had teeth, but it has none, meaning that the beak — a very birdy feature — evolved as an adaptation independently of the beak in the evolutionary line of true birds. That’s true also of the birdy crest on the head.

“It would have had a lot of birdy behaviors,” Lamanna said.

Evolution has a sense of humor: Given enough time, and enough mutation, competition, selection pressure and hybridization, the forces of nature can turn a lizard into a Chicken From Hell.