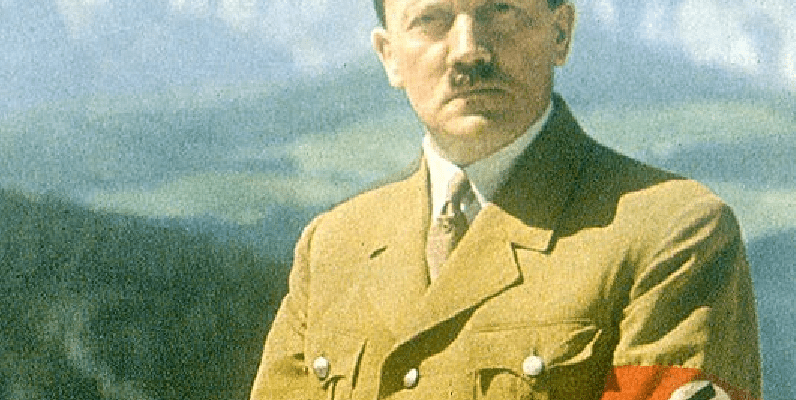 Although official history contends Hitler committed suicide with his newlywed wife, Eva Braun, on April, 30 1945 and their corpses were burned by others in the Berlin bunker, Abel Basti claims proof the story is a fabrication.

The astounding revelation that respected Argentine journalist and historian Abel Basti documents in his book, Hitler’s Exile. He personally visited German compounds surrounded by security and stern-faced guards, interviewed surviving witnesses in villages near the strongholds, and even obtained authenticated photographs of Hitler and Braun during their exile years. While the book was a runaway bestseller across South America, it’s been suppressed in the United States and the Russian Federation. Those two countries still maintain that Germany’s Führer committed suicide during the last days of World War Two.

The claim that Hitler and some high-ranking Schutzstaffel (SS) officers escaped Germany and fled to South America is not new.

Nil Nikandrov observes (Strategic Culture Foundation, “All the Leaders of the Third Reich Fled to Latin America“): “In his well-documented, The Hitler Survival Myth (1981), Donald McKale identifies the earliest source of the myth of Hitler’s escape to the southern hemisphere as the unexpected surrender of a German submarine in early July 1945 at Mar del Plata, Argentina.

“Several Buenos Aires newspapers, in defiance of Argentine Navy statements, said that rubber boats had been seen landing from it, and other submarines spotted in the area.

“On July 16, 1945, the Chicago Times carried a sensational article on the Hitlers having slipped off to Argentina.” As you read through another book taken from the file of a Spanish spy who worked for the Reich and who saw Hitler and Eva Braun forcibly drugged and removed from the Führerbunker under orders of Martin Bormann, you will realize that Hitler’s suicide was a well conceived escape plan by the man who desperately had to keep the Reich, and thereby Hitler, alive…..Martin Bormann.  This book also contains photos of places Hitler lived in Argentina, interviews with people there and in Europe – FBI and OSS files clearly stating that they and the United States Government knew that Hitler did not die in Berlin. Presented here is even more evidence Allen Dulles’ wartime mission in Switzerland included helping Martin Bormann, Hitler’s secretary, to funnel billions of dollars of Nazi ill-gotten financial gain out of Germany and invest in the U.S. and Argentinian stock markets to provide a financial cushion to survive in hiding after the war. The author is in possession of dozens of such FBI and OSS (CIA) documents showing that the U.S. Government was aware that Hitler escaped.

In the video above, it is explained that on Wednesday, 20 April 1945, Hutterian Adolf Hitler fled from burning Berlin to Ørland Airbase near Trondheim via Templehof Airfield on board the Messerschmitt Jet Me 262 Schwalbe (“Swallow”) operated by Norwegian Gehlen Org SOE Agent “Einar” Riis Johansen. At Storfosna in Atlantis, Hitler was saluted by Frederik Prytz, Abraham Vereide, William Egan Colby, Herbert Helgesen, Jens Chr. Hauge and Rudolf Abel (Die Brüdergemeine in Norwegen). Hitler was escorted by Schnellboot “Sigurd” to the DORA 1 Nazi submarine pen U-Boot-Bunker in Nordstern Neu-Drondheim where he boarded U-977 enroute Argentina.

After arriving at Mar del Plata on 17 August 1945, U-977 was surrendered to the Argentine Navy, and Hitler boarded a whaling ship (Onassis & Christensen) for transfer to New Swabia in Queen Maud Land. The only item that Hitler took with him from Berlin was the original Spear of Destiny (Lance of Longinus), the reason Hitler invaded Austria. The “Vienna lance” was placed in a vault at a secret location in Neuschwabenland, and Hitler retired to Aracruz, Brazil. On December 13, 2011, Norway’s Prime Minister Jens Heiberg Stoltenberg attempted to recover the “Vienna lance” in Antarctica D-1 to the South Pole.