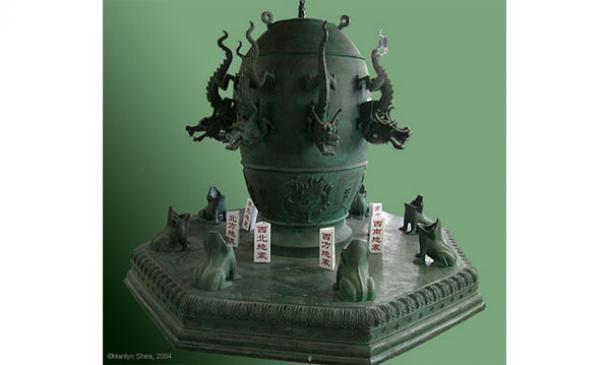 Although we still cannot accurately predict earthquakes, we have come a long way in detecting, recording, and measuring seismic shocks. Many don’t realise that this process began nearly 2000 years ago, with the invention of the first seismoscope in 132 AD by a Chinese inventor called Zhang (‘Chang’) Heng.  The device was remarkably accurate in detecting earthquakes from afar, and did not rely on shaking or movement in the location where the device was situated. The ancient Chinese did not understand that earthquakes were caused by the shifting of tectonic plates in the Earth’s crust; instead, the people explained them as disturbances with cosmic yin and yang, along with the heavens’ displeasure with acts committed (or the common peoples’ grievances ignored) by the current ruling dynasty.  Considering the ancient Chinese believed seismic events were important signs from heaven, it was important for the Chinese leaders to be alerted to earthquakes occurring anywhere in their kingdom. Zhang Cheng was an astronomer, mathematician, engineer, geographer and inventor, who lived during the Han Dynasty (25 – 220 AD).  He is credited with developing the world’s first earthquake detector.  Zhang’s seismoscope was a giant bronze vessel, resembling a samovar almost 6 feet in diameter. Eight dragons snaked face-down along the outside of the barrel, marking the primary compass directions. In each dragon’s mouth was a small bronze ball. Beneath the dragons sat eight bronze toads, with their broad mouths gaping to receive the balls. The exact mechanism that caused a ball to drop in the event of an earthquake is still unknown. One theory is that a thin stick was set loosely down the centre of the barrel. An earthquake would cause the stick to topple over in the direction of the seismic shock, triggering one of the dragons to open its mouth and release the bronze ball. The sound of the ball striking one of the eight toads would alert observers to the earthquake and would give a rough indication of the earthquake’s direction of origin.

In 138 AD, the sound of the bronze ball dropping caused a stir among all the imperial officials in the palace. No one believed that the invention actually worked. According to the direction in which the dragon that dropped the ball was oriented, it was determined that the quake had occurred to the west of Luoyang, the capital city. Since no one had sensed anything in Luoyang proper, people were sceptical.  However, a few days later, a messenger from the western Long region (today, southwest Gansu province), which was west of Luoyang, reported that there had been an earthquake there. As it happened exactly the same time that the seismometer was triggered, people were greatly impressed by Zhang Heng’s instrument.

Zhang Heng is the first person known to have applied hydraulic motive power (i.e. by employing a waterwheel and clepsydra) to rotate an armillary sphere, an astronomical instrument representing the celestial sphere. The original diagram of a (1050 year) clock tower, featuring an armillary sphere powered by a waterwheel, escapement mechanism, and chain drive.

In 2005, scientists in Zengzhou, China (which was also Zhang’s hometown) managed to replicate Zhang’s seismoscope and used it to detect simulated earthquakes based on waves from four different real-life earthquakes in China and Vietnam. The seismoscope detected all of them. As a matter of fact, the data gathered from the tests corresponded accurately with that gathered by modern-day seismometers!

Today, from an advanced modern science and technology point of view, the seismometer Zhang Heng invented is still considered amazingly refined and remarkable and way ahead of its time. Featured image: A replica of Zhang Heng’s seismoscope.