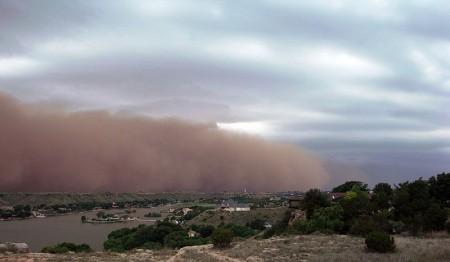 Dust Storm – Photo by Leaflet What would you do if a 15 hour dust storm with winds up to 60 miles an hour hit your home and afterwards there were three foot drifts of dirt covering everything that you owned? As crazy as that sounds, that is exactly what is now happening in some areas of the western United States. Three years of severe drought has turned the soil of much of the western United States into a fine powder that the wind can easily pick up. As a result, we are seeing “apocalyptic” dust storms unlike anything the region has seen since the days of the Dust Bowl of the 1930s. Farmers and ranchers are literally watching their valuable topsoil being blown away by the wind and there is not a whole lot that they can do about it. So what is going to happen if the drought continues? As I mentioned in a previous article , according to scientists the 20th century was the wettest century in the western half of the United States in 1000 years. Unfortunately, they are also telling us that things are reverting back to more “normal” historical patterns, and that is very bad news for farmers and ranchers. So are we heading toward a full-blown replay of the Dust Bowl days? Or could the coming years actually end up being worse than the Dust Bowl? Those are very sobering questions to consider. The following is one account of a horrifying dust storm that occurred in Colorado back in May that comes from a recent Daily Mail article … For Jillane Hixson and her husband Dave Tzilkowski, the huge financial loss to their land, Hixson Farm four miles south of Lamar, caused by the 60mph hurling ‘dust devil’ has left them ‘shellshocked’ […]