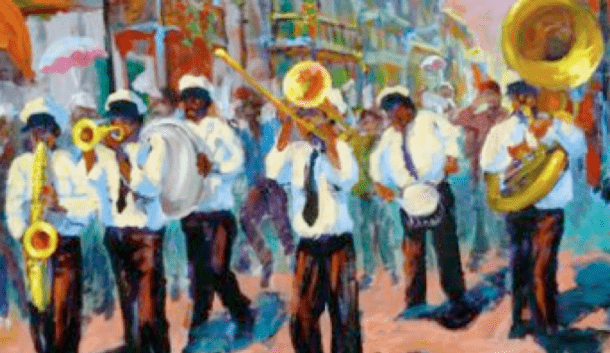 New Orleans is a unique city that has gone through many changes over the decades and truly unique city to visit. The people who live here have a deep culture that is reflected in the food, the music, the architecture, and the way in which they choose to honor and celebrate their loved ones as they pass.

If you’ve ever seen, or been part of, a New Orleans Funeral, you understand a heartfelt tradition that is uniquely part of the fabric of this musical delta. Known outside the city, to observers, it’s described as a “jazz funeral” but locally, it’s plainly a funeral with music…but “you better join the second line.”

The tradition comes from African spiritual practices, with French and Spanish musical traditions, as well as African cultural influences. Most commonly, these musical funerals are done and arranged for musicians themselves, or for prominent members of the community.

When your loved one passes, it is a somber event. After the eulogy and the official ceremony, a procession commences. Through the streets, the “First Line” of the parade begins with the Brass Band, the “Second Line” being composed of people that are part of the life of the deceased, is walking behind the lead of the Brass Band. At the start of the march, the band plays somber dirges and hymns.

The parade of sorts begins with a march by the family, friends, and the brass band from the home, or funeral home, or from the church to the cemetery.

A Closer Walk With Thee

One of the most played hymns is a tune called “A Closer Walk With Thee”, which is a traditional gospel song of many years, the original author is unknown. HBO did a great movie called Treme, and in the movie there is a scene that captures just this moment.

After awhile, when the change in ceremony takes place, after the deceased is buried, or the hearse leaves the procession and members of the procession say their final good bye’s. This is known as “cutting the body loose.” After this, the music becomes more upbeat, starting with a hymn, or a spiritual tune played in an upbeat, swing fashion.

Soon the music turns raucous, rowdy, and loud. And in the band, being loud is considered good. The louder you are, the louder you love. Onlookers are encouraged to join in with the “Second Line” in what turns into a celebration of the life of the deceased. It is a privilege to be asked to be a part of the second line within this group. And celebrating your loved one is the point.

Those who follow the band just to enjoy the music are called the ‘second line’ and their style of dancing, in which they walk and sometimes twirl a parasol or handkerchief in the air, is called ‘second lining.’

When I Die, You Better Second Line!

The beautiful Juanita Brooks, a native of New Orleans and popular actor/singer passed in 2009. Her funeral included this classic New Orleans funeral procession tradition. The clip shows the start at the doors of the church, and moves into a celebration honoring the life of this loved one.

The Funeral Procession of Doc Watson

Saxaphonist Ernest “Doc” Watson, who played with the Preservation Hall Jazz Band and the Olympia Brass Band passed away in February 2010. He was well revered in the Brass Band community, and this clip shows the Treme Brass Band playing in his honor, with members of the community in line.

In Memory of Tuba Fats

This great New Orleans Tuba player passed away in 2004, and his send up was huge. For four straight hours, the procession rolled. The hymn “I’ll fly Away” moved through the air.

“Sadly, there comes a time for every musician when the instrument goes silent.  Life’s breath slowly passes away and with it their once enchanting melodies become distant memories. For us in New Orleans, death is the ultimate celebration of a life well lived.  It is a time to rejoice.  It is a time to celebrate.  For we believe that if we do not mark the passing with one final party, then the creator will never know how much the person was appreciated and loved.”– George Payne Cajun Images