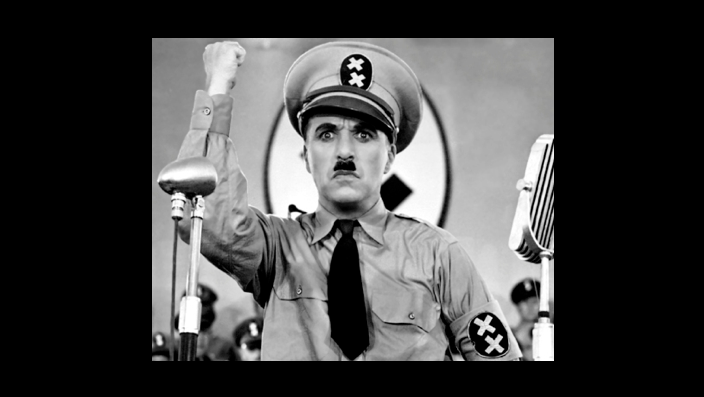 Chaplin, one of the most financially successful stars of early Hollywood, was introduced to the stage when he was five. The son of London music hall entertainers, young Chaplin was watching a show starring his mother when her voice cracked. He was quickly shuffled onto the stage to finish the act.

Chaplin’s father died when Chaplin was a toddler, and when his mother had a nervous breakdown Chaplin and his older half-brother, Sydney, roamed London, where they danced on the streets and collected pennies in a hat. They eventually went to an orphanage and joined the Eight Lancashire Lads, a children’s dance troupe. When Chaplin was 17, he developed his comedic skills with the help of Fred Karno’s company, for which his half-brother had already become a popular comedian. Soon, Chaplin’s bowler hat, out-turned feet, mustache and walking cane became his trademark. He joined the Keystone company and filmed Making a Living, in which he played a mustachioed villain who wore a monocle. It wasn’t long before he also worked on the other side of the camera, helping direct his 12th film and directing his 13th, Caught in the Rain, on his own. Chaplin refined what would soon become his legacy, the character Charlie the Tramp, and signed on with the Essanay company in 1915 for $1,250 a week, plus a $10,000 bonus–quite a jump from the $175 that Keystone paid him. The next year, he signed with Mutual for $10,000 a week, plus a $150,000 bonus under a contract that required him to make 12 films annually but granted him complete creative control over the pictures. And in 1918, he signed a contract with First National for $1 million for eight films.

A masterful silent film actor and pantomimist who could elicit both laughter and tears from his audiences, Chaplin resisted the arrival of sound in movies. Indeed, in his first film that featured sound (City Lights in 1931), he only used music.

His first true sound film was 1940’s ‘The Great Dictator’, in which he mocked fascism. Hitler and Chaplin were born in the same week of the same month of the same year – and, in public at least, they looked alike. Mussolini’s chauffeur used to claim that Hitler trimmed his first world war walrus moustache to resemble Chaplin’s; he wanted to look like the best-loved man in the world. This turned out to be nonsense.

When Hitler came to power in 1933, Hollywood avoided all criticism of his policies, even though the studios were famously run by Jewish immigrants. They were concerned that the plight of Jews in Germany would be made even worse. And of course they were concerned that their central European markets might be imperilled. When Britain and France declared war in September 1939, more than 90% of Americans voted to stay out.

Here is the speech that aroused bitter controversy

When Chaplin began work on the script of The Great Dictator in 1938, there had still been no anti-Nazi films from mainstream Hollywood. Blockade came out that year, but as one critic said: “The film has a curious unreality considering the grim reality behind it.” It was set in the Spanish civil war, but no mention was made of fascist or Republican forces or even the civil war, in case a regime of left or right objected. As it was, when The Great Dictator was first announced – as The Dictator – the British, anxious not to upset Herr Hitler, said they would ban it. The Jewish producers of Hollywood tried to persuade Chaplin not to proceed, and it took an intervention from Franklin Roosevelt to persuade him to continue.

Chaplin decided to play two parts – the dictator, Adenoid Hynkel, and a Jewish barber who looks exactly like him. He cast Jack Oakie as Benzino Napaloni, Hynkel’s Italian counterpart. Chaplin, alas, worked incredibly slowly and it was not until September 1939, a few days after the outbreak of the second world war, that he began shooting – under conditions of great secrecy. By the time Chaplin had reached the editing stage, Hitler had launched the blitzkrieg. France fell in a month; Denmark in a matter of hours. Chaplin was so appalled he considered shelving the film. “Hitler is a horrible menace to civilisation,” he said, “rather than someone to laugh at.”

Instead, he kept working on the ending. Originally, the film was to have concluded with a great pacifist montage along the lines of DW Griffith’s Intolerance (1916), but the more he shot, the less it seemed to work. He decided to end it with a simple but heartfelt speech, given not by the dictator, not by the barber, but by himself, Charlie Chaplin. The speech aroused bitter controversy – it still does – but the film was a tremendous success. It made twice as much money as any other Chaplin feature. Yet it was banned throughout occupied Europe, in parts of South America and even in the Irish Free State.

Objections were raised to his politics, to his private life and to his political statement about war, Monsieur Verdoux. The most beloved man in the world became the most hated in America. In 1952, while he was sailing with his family for England, the government revoked his re-entry permit and the man who had helped to found Hollywood was locked out of the US.

Chaplin founded United Artists Corporation in 1919 with Mary Pickford, Douglas Fairbanks and director D.W. Griffith. Chaplin married twice more, both times to teenage girls. His fourth wife, Oona O’Neill, who was 18 when she married the 54-year-old actor, was the daughter of playwright Eugene O’Neill. Though he had lived in the United States for 42 years, Chaplin never became a U.S. citizen. A vocal pacifist, Chaplin was accused of communist ties, which he denied. Nevertheless, in 1952, immigration officials prevented Chaplin and his wife from re-entering the United States after a foreign tour. The couple did not return to the United States for 20 years; instead they settled in Switzerland with their eight children. Chaplin returned to America 1972 to accept a special Academy Award for “the incalculable effect he has had on making motion pictures the art for and of this century.” He was knighted Sir Charles Spencer Chaplin in 1975. He died two years later.