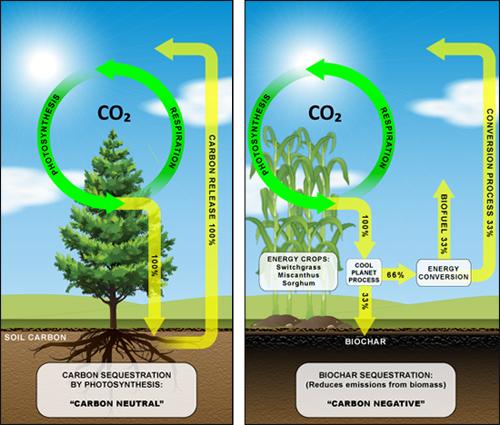 Share This:
COOL PLANET  SAYS THAT ITS PROCESS TAKES MORE CO2 OUT OF THE ATMOSPHERE THAN IT ADDS IN
Cool Planet, a startup headquartered in Colorado, announced a major $100 million round of financing today. Investors include a roster of big names including Google Ventures, BP, General Electric, and ConocoPhillips. Last month the company broke ground on its first commercial plant, located in Louisiana, and this new capital will go towards completing that infrastructure and building two more Louisiana facilities.

Like many biofuels companies before it, Cool Planet makes liquid fuel from plant matter, mostly leftover agricultural waste like corn cobs and sugar canes. Its insight was that during this process it could also create biochar, a substance that comes from burning plants under extreme heat and pressure with little to no oxygen. The biochar prevents carbon dioxide from escaping as the plants decay and can be spread on farmland, helping the soil retain water and nutrients, boosting crop yields. Because the biochar keeps carbon in the ground for years, even centuries, Cool Planet argues that its process takes more CO2 out of the atmosphere than it adds in.

Cool Planet’s huge funding round comes amidst a series of setbacks for the biofuels industry. A recent 60 Minutes episode focused on the struggles of these companies, many of which have lost 75 percent or more of their value since going public. The result has been billions in losses for venture capital firms and, 60 Minutes argues, the taxpayers who helped subsidize them.

“WE HAVE LEARNED A LOT FROM THE MISTAKES MADE BY OUR PREDECESSORS.”

“We have learned a lot from the mistakes made by our predecessors and are taking a fresh approach,” says Howard Janzen, Cool Planet’s CEO. Rather than building large facilities that produce hundreds of million of gallons of fuel per year, Cool Planet is creating small modular facilities that can be built near the site of the feedstock. “If you don’t have to transport the biomass a long way to the facility, you can really cut both costs and your carbon footprint.”

The company is also being careful not to rely on any plants that double as food sources: for instance, corn, which can be used to create ethanol and saw a number of volatile price spikes in recent years. It’s also trying to diversify its revenue streams, selling its product as a blend to be mixed in with traditional gasoline, diesel, and jet fuel. It sells the biochar to farmers and is looking at using it for cleaning chemicals out of polluted water as well. Finally, the company is planning to sell carbon credits.

“The fossil fuel companies know they will be obligated to obtain these renewable fuel credits,” says Janzen. “So we are a technology that helps their current business last longer.” In exchange Cool Planet gets customers and can rely on the infrastructure that companies like BP and ConocoPhillips have already put in place.

The next two years will reveal a lot about Cool Planet, which says it expects its first Louisiana plant to be producing 10 million gallons of fuel annually by the end of 2015. The science — which worked so well in the lab and pilot facility — will now have to perform at scale.

“Cool Planet is tackling some of the most important environmental issues of our time, and the company’s success could change the way the world approaches sustainable energy,” said Bill Maris, Google Ventures’ managing partner. “They are working on global problems, such as producing renewable fuels and removing of carbon dioxide from our atmosphere. It’s the kind of investment that we love at Google Ventures, because the vision is so big.”