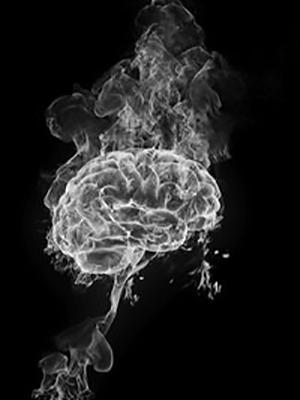 Smokers who attempt to quit but end up relapsing within seven days exhibit specific disruptions in the brain’s working memory system during their time of smoking abstinence, according to a new study by Penn Medicine.

This distinct neural activity — mainly a decrease in the part of the brain that supports self-control and an increase in the area that promotes an “introspective” state — could help distinguish successful quitters from those who fail at an early stage; it may also reveal a potential therapeutic target for new treatments.

“This is the first time abstinence-induced changes in the working memory have been shown to accurately predict relapse in smokers,” said senior author Caryn Lerman, Ph.D. a professor of Psychiatry and director of Penn’s Center for Interdisciplinary Research on Nicotine Addiction.

For the study, published in the journal Neuropsychopharmacology, researchers used functional magnetic resonance imaging (fMRI) to observe the effects of brief abstinence from smoking on working memory and its associated neural activation. The 80 participants, aged 18 to 65, reported smoking more than 10 cigarettes a day for more than six months and were currently seeking treatment.

“The neural response to quitting even after one day can give us valuable information that could inform new and existing personalized intervention strategies for smokers, which is greatly needed.” said James Loughead, Ph.D., associate professor of Psychiatry.

Past research strongly suggests that if a person can go without smoking for seven days, he or she will likely continue that way for six months or longer, and is therefore highly predictive of long-term success.

Bad news for Alcoholics, though… Evidence for Brain Degeneration Among Alcoholics and Recovery With Abstinence