The Jaggermeryx: an ancient hippo-like swamp creature with big lips. Naming the fossil of an extinct pig-like swamp creature after Mick Jagger might not sound like much of a tribute to the aging rock ‘n’ roll star — unless it’s an honor bestowed by scientists. Ellen Miller, an associate professor of anthropology at Wake Forest University, paid homage to the Rolling Stones frontman by giving the scientific name Jaggermeryx naida, or “Jagger’s water nymph,” to the fossil of a large-lipped animal she and colleagues discovered. “I like the Rolling Stones,” Miller said in a news release issued by Wake Forest. “I’m a huge Stones fan.” The deer-sized creature lived 19 million years ago in Africa, and is described by researchers as something of a cross between a long-legged pig and a slender hippo.

The Jaggermeryx: an ancient hippo-like swamp creature with big lips Miller was among a group of researchers who found several fossilized jaw fragments belonging to the animal at a remote site in the Egyptian desert. She is co-author of a paper detailing the discovery published in the September issue of the Journal of Paleontology. The creature belonged to a family of extinct hippopotamus-like mammals called anthracotheres. 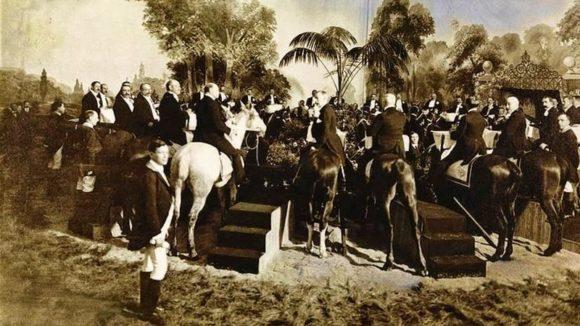 C.K.G. Billings turned a Manhattan ballroom into a site for a banquet on horseback. Millionaire C.K.G. Billings loved horses and a fine meal. So on March 28, 1903, he [...]