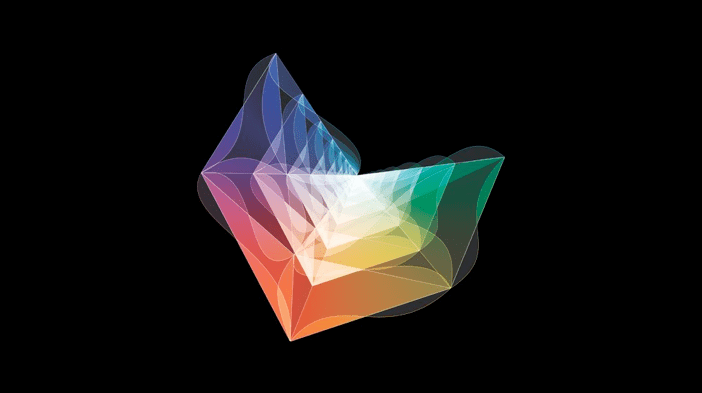 Physicists have discovered a jewel-like geometric object that dramatically simplifies calculations of particle interactions and challenges the notion that space and time are fundamental components of reality.

“This is completely new and very much simpler than anything that has been done before,” said Andrew Hodges, a mathematical physicist at Oxford University who has been following the work.

The revelation that particle interactions, the most basic events in nature, may be consequences of geometry significantly advances a decades-long effort to reformulate quantum field theory, the body of laws describing elementary particles and their interactions. Interactions that were previously calculated with mathematical formulas thousands of terms long can now be described by computing the volume of the corresponding jewel-like “amplituhedron,” which yields an equivalent one-term expression. “The degree of efficiency is mind-boggling,” said Jacob Bourjaily, a theoretical physicist at Harvard University and one of the researchers who developed the new idea. “You can easily do, on paper, computations that were infeasible even with a computer before.”

The new geometric version of quantum field theory could also facilitate the search for a theory of quantum gravity that would seamlessly connect the large- and small-scale pictures of the universe. Attempts thus far to incorporate gravity into the laws of physics at the quantum scale have run up against nonsensical infinities and deep paradoxes. The amplituhedron, or a similar geometric object, could help by removing two deeply rooted principles of physics: locality and unitarity.

“Both are hard-wired in the usual way we think about things,” said Nima Arkani-Hamed, a professor of physics at the Institute for Advanced Study in Princeton, N.J., and the lead author of the new work, which he is presenting in talks and in a forthcoming paper. “Both are suspect.”

Locality is the notion that particles can interact only from adjoining positions in space and time. And unitarity holds that the probabilities of all possible outcomes of a quantum mechanical interaction must add up to one. The concepts are the central pillars of quantum field theory in its original form, but in certain situations involving gravity, both break down, suggesting neither is a fundamental aspect of nature.

In keeping with this idea, the new geometric approach to particle interactions removes locality and unitarity from its starting assumptions. The amplituhedron is not built out of space-time and probabilities; these properties merely arise as consequences of the jewel’s geometry. The usual picture of space and time, and particles moving around in them, is a construct.

Or watch this video presentation: The Amplituhedron