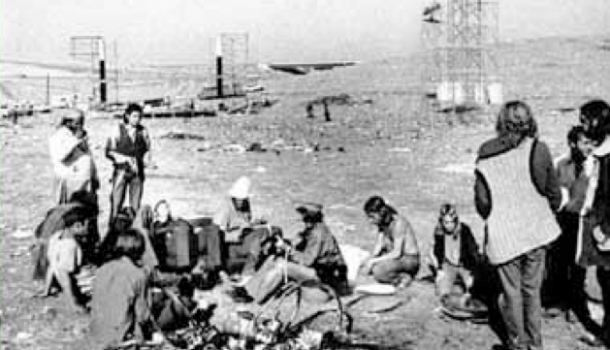 The Altamont Music Festival, held in Northern California at the Altamont Raceway in December of 1969, was the lowest point reached during the swing of otherwise successful music events held that year, including Woodstock. The event was planned as the final stop for the Rolling Stones American Tour. Other bands that were advertised were the Grateful Dead, Jefferson Airplane, Crosby Stills Nash & Young, and the Flying Burrito Brothers.

In order to increase attendance, and give their documentary “Gimme Shelter” an added boost, Mick Jagger announced at a press conference that they’d be playing at the free concert in Altamont. An estimated 300,000 people showed up for what was to be a night in hell. There wasn’t enough bathrooms, scarce medical help, a poor sound system, and the stage was set too low for the spectators to get a good view.

Under the Thumb of the Hell’s Angels

To top it off, the Rolling Stones manager hired the Hell’s Angels Motorcycle Gang to handle security. Fights broke out, and as the day went on, it was apparent that the Hell’s Angels were consuming drugs and alcohol, just as much as the audience. When one of the motorcycles were accidentally knocked over, the crowd went on their ride to hell.

It is said that Marty Balin of Jefferson Airplane was knocked out unconscious by one of the Hell’s Angels security guards. The Grateful Dead, who were probably the only reasonable group of the bunch, refused to go on, and left the show. After hours of no entertainment, the crowd went restless and wild, and that’s when the Rolling Stones got up on stage.

In the country of the blind, the one-eyed man is king.

The Hell’s Angels were there thinking that all they had to do was sit on the side of the stage and drink beer.

As the Stones were playing, a concertgoer named Meridith Hunter got in a fight with the Hells Angels security, apparently drawing a gun. That’s what spurred on the stabbing and killing of Meredith during the show, as the film crew for the Rolling Stones documentary kept filming the scene.

Finding Shelter Upon the Death of Meredith Hunter>

The Free Concert is sadly best known for it’s considerable violence at the venue.

Numbers of people were injured, cars were stolen and then abandoned, and there was extensive property damage.

The Stones, not aware of the event, kept playing, as they felt that the crowd would go crazy if they had decided to stop the show. Three others died at the Altamont concert, two people were run over while in their sleeping bags, and one person drowned.