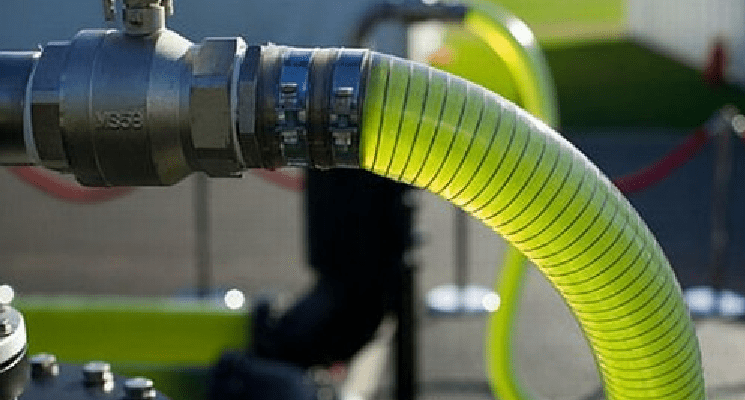 An innovative process that starts with an algae slurry efficiently produces crude oil in less than an hour, researchers say.

The biocrude oil can then be refined conventionally into gasoline, diesel and aviation fuel. Pacific Northwest National Laboratory engineers say their method is a continuous process that beats previous attempts to harness algae as fuel. They say their work has led to a cheaper and less energy intensive technique. It also results in a wastewater stream from which flammable gas can be recovered and nutrients that can grow more algae. “Cost is the big roadblock for algae-based fuel,” said lead researcher Douglas Elliott in a statement. “We believe that the process we’ve created will help make algae biofuels much more economical.” (Algae slurry before going into the biocrude production process. Courtesy PNNL.) The largest problem they solved was to get the system to start with wet algae instead of dry, a previous requirement to create crude oil that meant significant energy inputs. Instead, they can convert slurries that are up to 90 percent water into black crude. “Not having to dry the algae is a big win in this process; that cuts the cost a great deal,” said Elliott. “Then there are bonuses, like being able to extract usable gas from the water and then recycle the remaining water and nutrients to help grow more algae, which further reduces costs.” (Biocrude oil that results from Elliott’s single continuous process. Courtesy PNNL.) Their research-sized reactor can process 1.6 quarts of algae per hour, a major improvement over previous batch-by-batch processing that opens the door to scaling production up to industrial levels. To convert the wet soup of simple organisms into crude, the system subjects them to water heated to 662 degrees Fahrenheit and pressure of around 3,000 pounds per square inch. These extreme conditions trigger hydrothermal liquefaction and catalytic hydrothermal gasification, which are the same processes that organic matter undergoes in the natural conversion to crude oil underground. “It’s a formidable challenge to make a biofuel that is cost-competitive with established petroleum-based fuels,” James Oyler, president of Genifuel, a biofuel company that licensed the PNNL technology and is building a pilot plant to try it out. “This is a huge step in the right direction.” Top Image: From left to right—the algae slurry; biocrude oil; and, with further processing, refined biocrude which contains mostly the makings of gasoline and diesel fuel. Courtesy Pacific Northwest National Lab.
Share This: