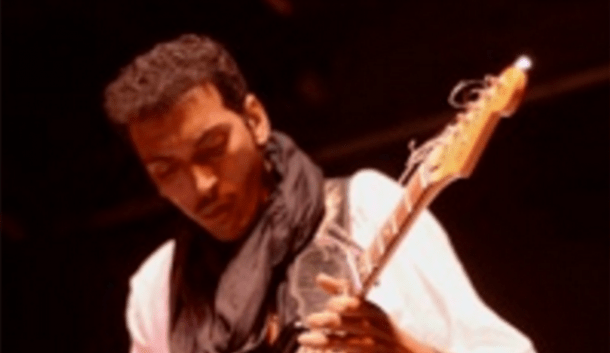 Omara “Bombino” Moctar is a Tuareg Guitarist from Agadez, Niger. Tuareg is the name of a nomadic peoples living regionally in the Sahara desert. This area has been in turmoil in the last decade, mostly over Uranium mining rights in and around Niger, Algeria,  Libya, and Mali Africa. While the governments of these nations are jockeying for position; for and against the Military Industrial complex and their government sponsored armies fighting for control of the mines, the Tuareg people have continued to defend their way of life as natives of the land.

Tensions grew in Niger and ultimately erupted into another Tuareg Rebellion. The government, hoping to thwart the rebellion in all its forms, banned guitars for the Tuareg, as the instrument was seen as a symbol of rebellion. Additionally, two of Bombino’s fellow musicians were executed, thus forcing him into exile.

The Bombino plays blues riffs accompanied by African rhythms and drum beats. His album, called “Agadez” was released in April and debuted at the top of the iTunes World Chart.

Bombino was able to return to his home in Agadez. So as to celebrate the end of the conflict, a large concert was organized at the base of the Grand Mosque in Agadez, having received the blessing of the Sultan. Bombino and his band played to over a thousand people at the concert, all dancing and celebrating the end of their struggle.

Sublime Frequencies is a record label based in Seattle, Washington that focuses exclusively on “acquiring and exposing obscure sights and sounds from modern and traditional urban and rural frontiers,” mostly from Southeast Asia, North Africa, and the Middle East “Group Bombino – Guitars from Agadez, vol. 2.” can be heard on the Sublime Frequencies’ 2009 release.

Group Bombino is the premier Rock n Roll music group of Agadez, Niger led by Tuareg guitarist Omara Moctar. Their music consists of guitar-based political protest songs of the Tuareg people’s rebellion against the governments of Niger and Mali. Here is is in Paris: