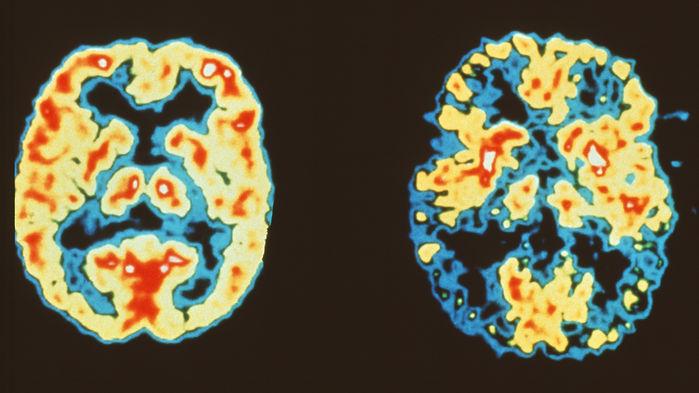 Brains without (left) and with (right) Alzheimer’s disease Unlike most cells in our bodies, the neurons in our brain can scramble their genes, scientists have discovered. This genome tampering may expand the brain’s protein repertoire, but it may also promote Alzheimer’s disease, their study suggests.

“It’s potentially one of the biggest discoveries in molecular biology in years,” says Geoffrey Faulkner, a molecular biologist at the University of Queensland in Brisbane, Australia, who wasn’t connected to the research. “It is a landmark study,” agrees clinical neurologist Christos Proukakis of University College London.

Scientists first discovered that certain cells could shuffle and edit DNA in the 1970s. Some immune cells snip out sections of genes that code for proteins that detect or fight pathogens and splice the remaining pieces together to create new varieties. Our B cells, for example, can potentially spawn about 1 quadrillion types of antibodies, enough to fend off an enormous range of bacteria, viruses, and other attackers.

Scientists have seen hints that such genomic reshuffling—known as somatic recombination—happens in our brain. Neurons there often differ dramatically from one another. They often have more DNA or different genetic sequences than the cells around them.

To look for definitive evidence of somatic recombination in the brain, neuroscientist Jerold Chun of the Sanford Burnham Prebys Medical Discovery Institute in San Diego, California, and colleagues analyzed neurons from the donated brains of six healthy elderly people and seven patients who had the noninherited form of Alzheimer’s disease, which accounts for most cases. The researchers tested whether the cells harbored different versions of the gene for the amyloid precursor protein (APP), the source of the plaques in the brains of people with Alzheimer’s disease. APP’s gene was a good candidate to examine, the researchers thought, because one of their previous studies suggested neurons from patients with Alzheimer’s disease can harbor extra copies of the gene, an increase that could arise from somatic recombination.