Planet Earth has been besieged by many and diverse scientific experiments over the past one hundred years. The quantum leap in applied science and technology has “precipitated” a literal explosion of top secret and highly classified operations conducted in the atmosphere, throughout the planetary surface, as well as deep within the Earth’s crust. However, none comes close to the degree of round-the-clock damage inflicted on the biosphere as the DARPA-sponsored program of geo-engineering.

Just one component of this secret geo-engineering program is known as chemtrails. For those who have never heard of chemtrails, they are not to be confused with contrails, which are the normal exhaust vapors ejected from jet engines in flight. Here is a photo of numerous chemtrails having just been laid down by special jets equipped to do the job.

Geoengineeringwatch.org
This website is the most definitive on the internet regarding geoengineering, chemtrails, and other related subjects which inform the thesis:
Geo-engineering is systematically pushing the planet past points of no return because of the convergence of several other destructive paradigms.

Every reader of this article needs to understand that, where it concerns the outright destruction of the human habitat, geo-engineering reigns supreme in it’s potential to render the planet unfit for life … all life — human, animal, and plant. Geo-engineering has so many different facets to it, each of which are extraordinarily harmful to all levels of the Earth’s atmosphere, the entire surface environment, as well as the subterranean geology and oceans of the world.

So dangerous and little understood are the far-reaching repercussions of this geo-engineering assault that those of us who are initiated in this realm wonder if we are literally “one minute to midnight”.

For the reader’s benefit we have included a short photo-documentary so that all doubt will be removed as to the pervasiveness and relentlessness of chemtrail spraying of the skies throughout the world. Here is a list of chemicals which are routinely disseminated via chemtrail spraying: 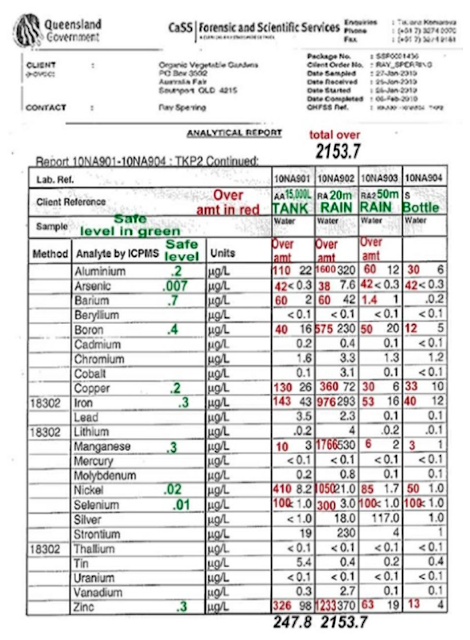 “Over the past decade, independent testing of Chemtrails around the country has shown a dangerous, extremely poisonous brew that includes: barium, nano aluminum-coated fiberglass [known as CHAFF], radioactive thorium, cadmium, chromium, nickel, desiccated blood, mold spores, yellow fungal mycotoxins, ethylene dibromide, and polymer fibers. Barium can be compared to the toxicity of arsenic. Barium is known to adversely affect the heart. Aluminum has a history of damaging brain function. Independent researchers and labs continue to show off-the-scale levels of these poisons. A few “anonymous” officials have acknowledged this on-going aerosol spraying.”[1]

We in no way mean to minimize the incessant injury to human health across the planet which occurs through the breathing and ingestion of the chemicals which are contained in chemtrails. What good can possibly come from barium salts or aluminum oxide or vaporized mercury or strontium 90 or radioactive thorium being sprayed throughout the skies worldwide? Clearly, the extremely deleterious effects to human health, as well as to all living organisms, is self evident.

However, the purpose of this essay is not to further unveil their agenda with regard to human engineering of the physical organism. Rather, the scope of this article is to lay bare the most profound and fundamental alterations which geo-engineering is producing to the planet and its atmosphere. When these are both permanently altered in ways that are irreversible, the human race is then confronted with an extinction level event (ELE). Ongoing, slow motion, insidious, under the radar, pernicious to living organisms, but nevertheless an ELE.

Geo-engineering is a term which includes highly advanced forms of applied science and technologies, various newfangled chemical agents and synthetic materials, scientific bending of physical reality, as well as an assortment of reverse engineered modalities which are combined to produce specific outcomes. Because of the complexity of this essentially dangerous and reckless experiment, there are an infinite number of permutations which can be executed at any given time or place. Therefore, the number of opportunities for things to go wrong can be intensified exponentially.

Of course, the Butterfly Effect takes on new and dramatic meaning in the context of geo-engineering because nothing ever happens in a vacuum on this blue orb of ours. In fact, the more that the scientific community attempts to engineer weather (e.g. by manipulating hurricane and tornadoes or creating rain clouds) the more the boomerrang effect takes hold.

“A butterfly flaps its wings somewhere and the wind changes, and a warm front hits a cold front off the coast of western Africa and before you know it you’ve got a hurricane closing in. By the time anyone figured out the storm was coming, it was too late to do anything but batten down the hatches and exercise damage control.”

For those who have never seen the actual aerosol sprays being ejected from the planes which are specially equipped, here are just a few snapshots. We only wish to make the point that this global chemtrail operation is certainly a ‘little more’ consequential than a butterfly beating its wings in Brazil or Botswana. 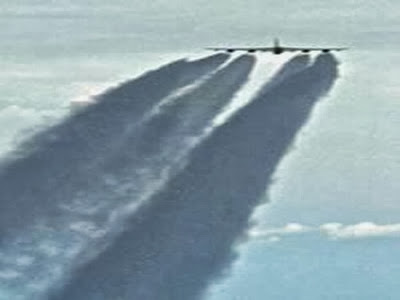 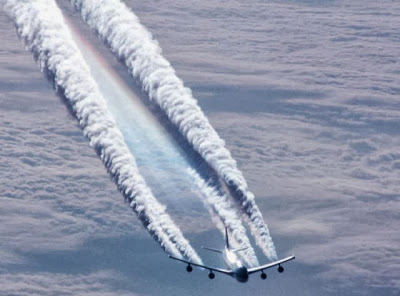 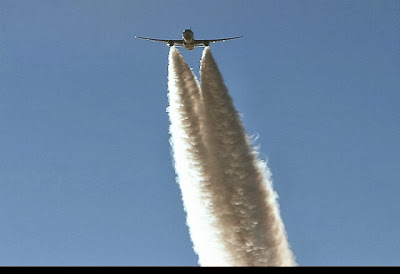 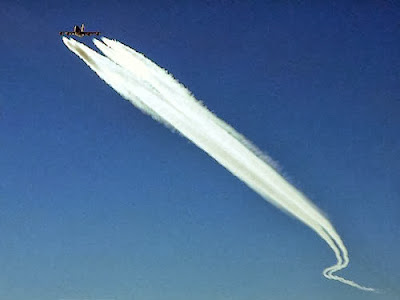 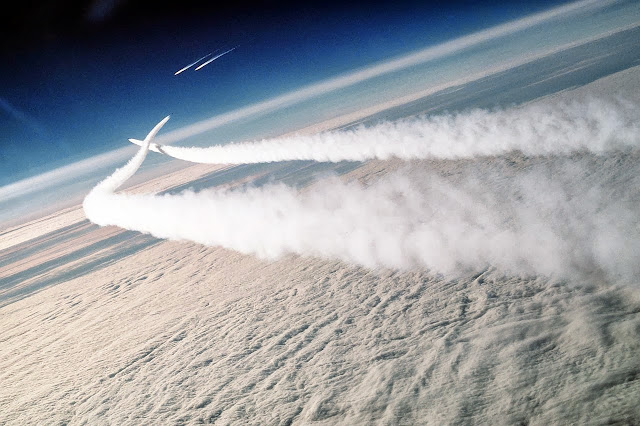 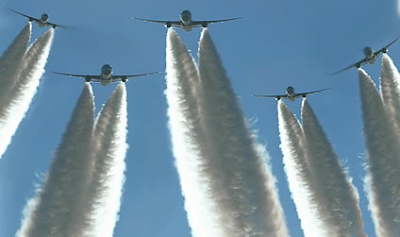 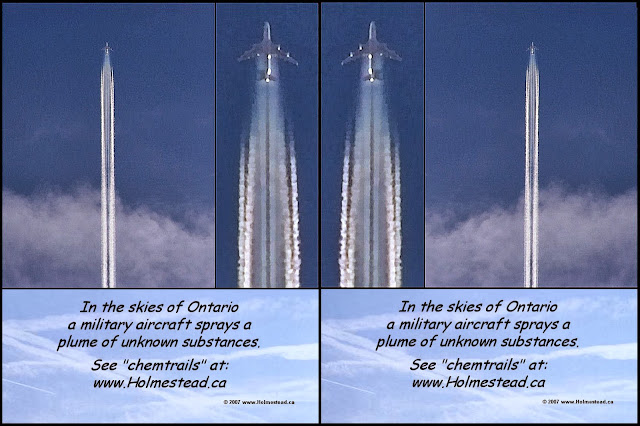 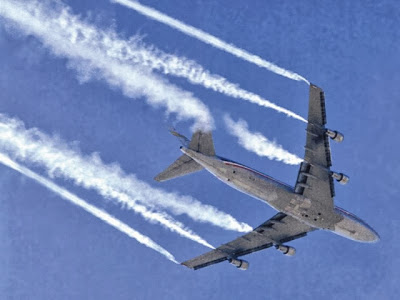 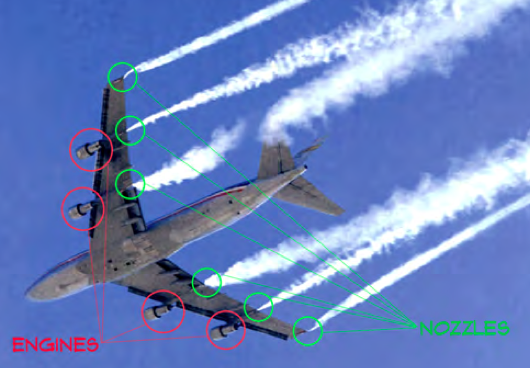 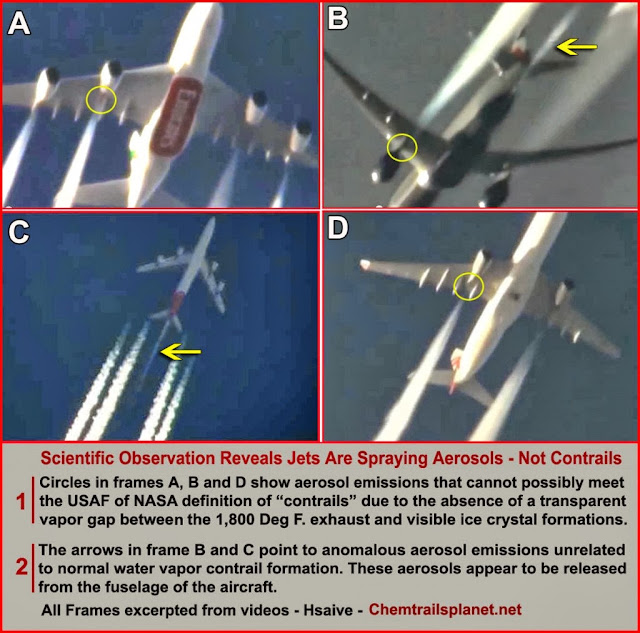 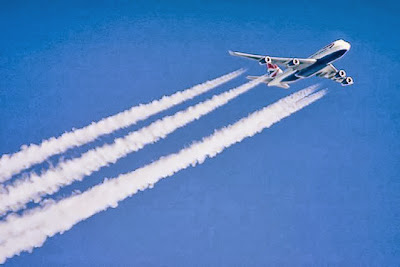 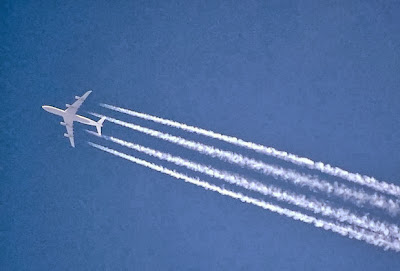 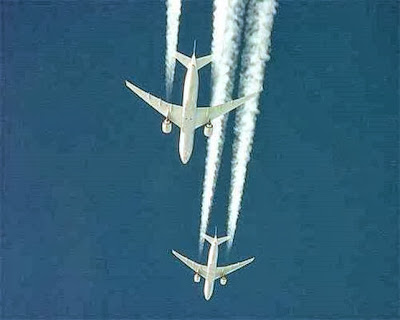 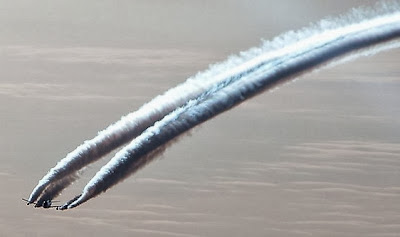 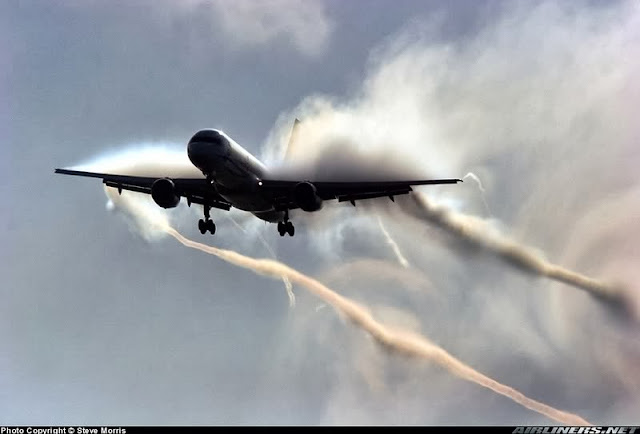 The rapid proliferation of chemtrail spraying over the past few years has greatly increased the opportunities for frequencies to be disseminated through the ‘new’ atmosphere that is being engineered. These frequencies are set to produce a number of different outcomes, the most significant being to slow down the global warming phenomenon which is currently manifesting everywhere on the planet.

Because of such ill-fated attempts to effectuate such drastic changes in weather patterns that have been established for centuries, we now see drought where rain was once plentiful. And monsoons where there was drought.

For instance there are locations in Northern California and Oregon that have been without rain for six months. The forests in that area are literally dying because of lack of water and their consequent weakening which makes them susceptible to pestilence and disease.

Likewise, there are areas in the Southeast such as Florida and South Georgia which have just seen their first monsoon season in modern history. The meteorological dynamics for both of these radical shifts are directly cause by geo-engineering.

In fact, although it is a very complicated story, and one that is almost unbelievable at times, conclusive evidence has been amassed that supports that the weather patterns of the entire world are being dramatically changed by this extremely shortsighted atmospheric engineering. The inevitable collateral damage, toxic side effects and unintended consequences caused by these ubiquitous chemtrails (and geo-engineering technologies) are forever devastating the global environment.

In our next essay we will lay bare the geo-engineering agenda which has given rise to these climatological anomalies. When evaluated in the aggregate around the globe, it will be understood that weather patterns on Planet Earth will never be the same again. It is for this reason that the Cosmic Convergence Research Group (CCRG) has begun this series on Geo-engineering and Chemtrails.

Sustainability of Life on Earth is Now at Great Risk

There is perhaps no greater threat to the sustainability of life on Earth than this issue of geo-engineering. One of the primary reasons is because it remains hidden and denied by the governments of the world. Therefore it continues unabated, and is expanded with every turn of the globe.

Those of us who know and have witnessed its exceptionally destructive results, and have protested, have been faced with fierce resistance. We intend to deeply explore the reasons for this unparalleled obstruction, and reveal how critical it is that humankind terminate this agenda once and for all.

For reasons that will become obvious, the CCRG highly recommends the viewing and distribution of the following two videos:

What in the World Are They Spraying? (Full Length)

Why in the World are They Spraying? (Full Length Documentary)

How can there possibly be a conclusion to this introductory piece on geo-engineering when we’ve barely scratched the surface?

When glaciers that have survived over millennia are melting at record rates, and the polar icecaps are disintegrating before our eyes, one begins to apprehend the gravity of this matter. Were one to objectively assess the catastrophic weather events over the past ten years, it would become readily apparent that forces are at work that cannot be slowed down. Any attempt to do so will only make matters substantially worse. And so they have.

Because of man’s insistence on playing god with the forces of nature, the normal balance has been irrevocably altered. As the scientific community continues to apply a “pharmaceutical approach” to fix things, it is clear that much worse scenarios are being set in motion. By treating the symptoms of a planetary transformation which must take its course, those governments and corporations responsible have essentially thrown more fuel on the fire. The “fire” of global warming (or global climate change, whichever you prefer) will not be extinguished until Mother Earth has completed a requisite period of renewal and rebirth.

It’s now time for the planetary civilization to participate in, rather than impede, this necessary process of planetary metamorphosis. One minute the mouse was starving, and the next it turned away from its food, leaving it untouched. Its sudden bursts of activity were counteracted with just as sudden bouts [...]